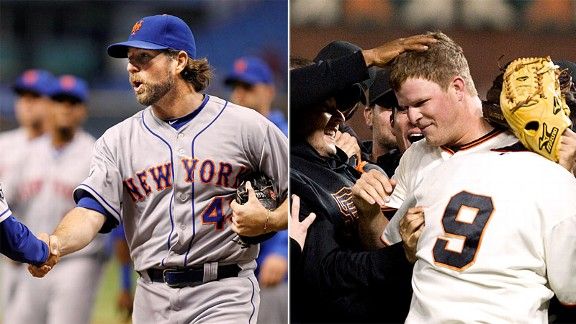 Matt Cain and R.A. Dickey delivered two of the best pitching gems of the season last week.R.A. Dickey and Matt Cain are each following up great performances last Wednesday with a start on Monday night.

Dickey, who is 10-1 this season, faces the Baltimore Orioles tonight at Citi Field in the New York Mets 68th game of the season. He will try to become the first pitcher in Mets history to be 10 games above .500 this early into a season (in terms of team games played), according to the Elias Sports Bureau.

Dickey also enters the game having won eight starts in a row, including a streak of four straight starts without allowing an earned run and with at least eight strikeouts, which is tied for the longest such streak in MLB history.

None of the last three pitchers who threw perfect games retired the side in order in the first inning of their next start, according to Elias. The last pitcher to do that coming off a perfecto was Mark Buehrle in 2009.

Cain is also riding a seven-game winning streak and has an 0.59 ERA in his last four starts. His seven-start win streak is tied for the second-longest by a San Francisco Giants pitcher in the Divisional Era.

Their numbers and current hot streaks are such that both are legitimate candidates to start the All-Star Game for the National League. Let’s take a closer look at their seasons to try to figure out who has been better.

We’ll use Bill James’ Game Score, which rates starts on a 0-100 scale, based on a pitchers’ innings pitched, runs, hits, strikeouts, and walks. Cain’s perfecto got a 101, one of the rare starts in baseball history that surpassed 100; Dickey’s one-hitter last Wednesday was a 95.

Dickey’s average Game Score this season is a 64.7. He’s had five straight starts with a Game Score of 74 or better, the first pitcher to do that since Chris Carpenter had six straight in 2005. The only other Mets pitchers with five-start streaks like that were Tom Seaver (1975) and Dwight Gooden (1985).

Cain’s average game score thus far is a 66.8. He posted a Game Score of 96 in a start earlier this season and is the first pitcher with two starts of 96 or better in a season since Randy Johnson in 2002 (the only pitcher with three in the Live Ball Era was Nolan Ryan in 1990).

Of Dickey’s 13 starts, 11 have rated above the major-league average, which has historically been a Game Score of 49. Cain, on the other hand, has 10 starts out of 13 with a Game Score of 50 or higher, one fewer than Dickey.