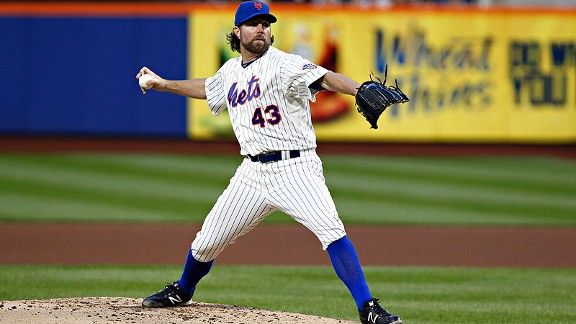 R.A. Dickey is the first Mets pitcher with consecutive one-hitters.R.A. Dickey accomplished something that hadn’t been done in 24 years.

By throwing a one-hitter against the Baltimore Orioles on Monday night, the New York Mets ace became the first pitcher to throw consecutive one-hitters since Dave Stieb in 1988 for the Toronto Blue Jays.

He’s not just the first in 24 years. He’s only the second to accomplish this feat in the past 65 years and the first National League pitcher since Jim Tobin in 1944 for the Boston Braves.

Allowed 1 Hit or Fewer Since 1900
Consecutive App, Both Complete Games

Dickey is the 10th pitcher since 1900 to allow one hit or fewer in consecutive complete games and the first for the Mets. After throwing his previous one-hitter against the Tampa Bay Rays on Wednesday, Dickey is the only pitcher ever with consecutive interleague one-hitters.

Dickey is the first pitcher in modern baseball history (since 1900) with back-to-back one-hitters of at least 10 strikeouts, according to the Elias Sports Bureau.

Dickey is now 11-1 this season. According to Elias, no pitcher in Mets history has been 10 games above .500 this early (in terms of team games played) in a season. The franchise record in that category was held by Tom Seaver, who in 1969 defeated the Pittsburgh Pirates on July 4 to improve to 13-3 in what was the Mets' 77th game that season. Dickey got to 10 games over .500 in 68 team games.

Elias also tells us that Dickey is only the fifth pitcher in MLB history with at least 11 wins, an ERA lower than 2.50 and at least a strikeout per inning through his first 14 starts. The previous four pitchers were Francisco Liriano, Randy Johnson, Pedro Martinez and Sandy Koufax.

HOW DID HE DO IT?

How did Dickey mow down the Orioles' hitters?

• Dickey threw 35 knuckleballs at 80 mph or faster, the third straight start in which he's thrown at least 30 knuckleballs at that speed. Before those three starts, his previous high in a start was 17 such pitches.

• Eleven of the 15 balls in play against Dickey were grounders (73 percent), his second-highest percentage this season.

• Orioles hitters were 0-for-7 with seven strikeouts in at-bats ending with a ball up in the zone from Dickey. Six of those strikeouts were against knuckleballs.