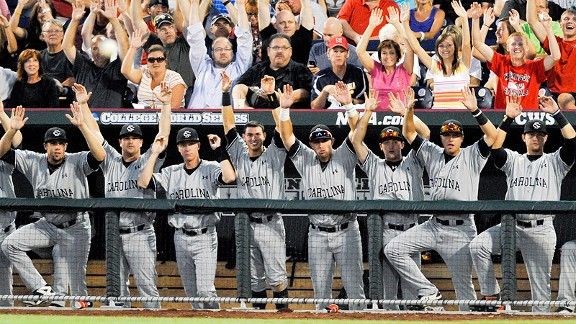 South Carolina is looking to celebrate its third straight CWS title.The South Carolina Gamecocks, which open play in the CWS Finals tonight (ESPN2, 8 ET) against the Arizona Wildcats, are looking for their third straight title. If they are successful, it will cap an amazing year for the Southeastern Conference.

This school year, the SEC has won national championships in nine sports. Two more wins for the Gamecocks will give the conference titles in half of the 20 sports that it sponsors, with the wealth spread among five schools.

Florida also finished first in multiple sports, with championships in women’s tennis and both men’s indoor and outdoor track and field.

They were joined by Kentucky, which won the men’s basketball title, and LSU, which claimed the women’s outdoor track and field crown.

The SEC has the chance to be the fourth conference to win the national title in football, men’s basketball and baseball in the same school year. The last conference to do so was the Pac-8 in 1972-73.

Beyond conference supremacy, South Carolina has a chance to rewrite the college baseball record book.

The Gamecocks are the back-to-back defending national champion. If they can beat Arizona in the CWS Finals, they will be just the second team to win three straight titles. The USC Trojans won five straight from 1970 to 1974.

The key for South Carolina during its run has been pitching. The Gamecocks have allowed eight runs in their first five games in Omaha, and are on pace to be just the sixth team since aluminum bats were introduced in 1974 to allow an average of two or fewer runs per game in the CWS.

The string of pitching success stretches back to 2004. South Carolina has allowed four runs or fewer in each of its last 19 CWS games. That’s the second longest streak in CWS history. Arizona State went 22 straight games from 1965 to 1973 without allowing more than four runs.

The Championship Finals feature the two conferences with the most storied history at the College World Series.

Current Pac-12 schools have won 23 baseball titles, easily the most by any conference. Most of the legacy was built during the first 40 years of the College World Series. Since Stanford won back-to-back titles in 1987 and 1988, the Pac-12 has only three titles.

On the other hand, the SEC didn’t win its first baseball title until 1990. But the conference has been a dominant force since then, winning nine of the last 22 championships and sending 10 different schools to Omaha.

This year’s tilt between South Carolina is the fourth time that current Pac-12 and SEC schools have met in the title game. The SEC came out on top the last two times, with South Carolina beating UCLA in 2010 and LSU beating Stanford in 2000.

The only loss came in 1977, when South Carolina lost to Arizona State. At that time, the Sun Devils were in the WAC and the Gamecocks were independent in baseball.