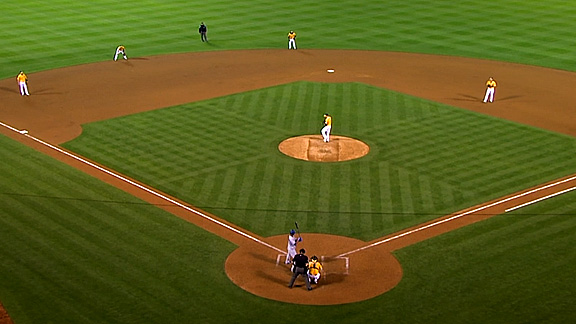 ESPN Stats & Info and Baseball Info Solutions examined every line drive and groundball hit by two noted pull hitters: left-handed David Ortiz and right-handed Edwin Encarnacion (we omitted fly balls because only line drives and groundballs would be affected by an infield shift).

The shift has worked on Ortiz this year. The average major-leaguer has a Batting Average on Balls In Play (BABIP) of .232 on ground balls. Ortiz has hit 81 groundballs, 70 of which were hit into the shift on the right side, and has only eight hits (.114 BABIP).

But Ortiz compensated by going the other way. He has hit 20 opposite field liners and grounders, and 16 have been hits (.800 BABIP), many of which would have been routine outs with a regular defensive alignment.

A good candidate for a right-handed shift is Encarnacion, who leads the league in pulled hits (52) and pull percentage (70.3), i.e. the percent of hits that are pulled.

Encarnacion has hit 100 line drives or groundballs so far this year, 93 of which were to left or center field. Of those 93 liners or grounders, 42 were hits, equating to a .452 BABIP, which is tied for sixth-highest in the league. He has hit only four groundballs to the right side this year.

It’s possible that shifts on righties aren’t more common because they present logistical problems. The shortstop would need a very strong arm to manage a throw from deep in the hole. However, most shortstops can make that throw, according to Baseball Prospectus scout and Insider contributor Kevin Goldstein.

Because the shortstop most likely won’t have to field the ball to his right, the real problem might lie with the second baseman. “The second baseman goes to his right on a play, and suddenly he's the one going the 'wrong way' needing to make a big play and he's already left of the bag,” said Goldstein.

There will also be a lot of open real estate on the right side of the infield, especially when the first baseman is holding on a runner, but when the hitter at the plate has hit only three ground balls to the second baseman, like Encarnacion this year, it might be worth the risk.

We estimate that if the shift had been run on Encarnacion all year, 12 of his hits could have been turned into outs. When we factor the three ground-ball outs he hit at the second baseman this year as hits, Encarnacion would have still lost nine hits, dropping his average from .282 (51st in the league) to .248 (t-121st).