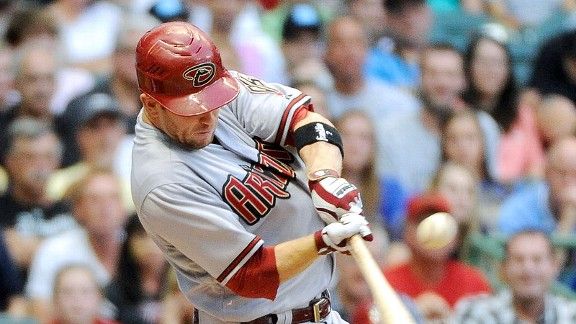 Aaron Hill became the fourth player in Major League Baseball history to hit for the cycle twice in the same season.Barry Bonds, Tony Gwynn, Willie Mays, Babe Ruth and Ty Cobb are among the great hitters who never did it even once in their careers.

Aaron Hill now has hit a cycle twice in 12 days.

He's the first player with two cycles in the same season since Babe Herman in 1931.

Hill, whose previous cycle was June 18, is the second player in MLB history with two cycles in the same calendar month and the first since Reilly in September 1883.

The concept that Reilly accomplished this feat in 1883 and nobody else did for almost 129 years is incredible. It’s a rare gap between feats.

Let’s consider what was happening in the United States back in 1883:

• The president was Chester A. Arthur and there was no vice president.

• Basketball hadn’t been invented yet.

• The Brooklyn Bridge opened to traffic in May.

• Airplanes had not yet been invented.

How did Hill hit for the cycle Friday?

• In the first inning, he hit a ground-rule double off a fastball, his eighth double against a fastball this season.

• In the third inning, he singled to center off a slider. He was hitting .267 against sliders going into the game.

• In the sixth inning, he tripled to center field off a slider.

Hill is hitting .465 in his past 10 games with four home runs, 11 RBIs and a .953 slugging percentage. Eleven of his 20 hits are extra-base hits during that span.

No player in MLB history has had three cycles in the same season. The Arizona Diamondbacks still have 86 games left, so Hill has a chance to be the first to do so.