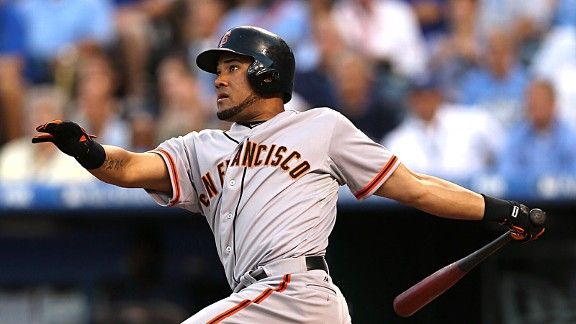 Melky Cabrera homers in the fourth inning of the 83rd All-Star Game in Kansas City to help the NL win its third straight over the AL.Tuesday's Midsummer Classic was a big All-Star showcase for the city of Kansas City but the spotlight was stolen in a Giant way.

Ryan Braun became the fifth player with a double and triple in the same All-Star Game joining are Hall-of-Famers Earl Averill (1934), Willie Mays (1960), Mike Schmidt (1979) and George Brett (1983). It was a nice rebound for the reigning NL MVP who was 0-4 vs Justin Verlander in regular-season play and had struck out against Verlander in the fifth inning of the 2010 All-Star Game.

The Elias Sports Bureau confirmed that this was the third time that reigning MVPs went head to head in a batter-pitcher matchup in an All-Star Game and Braun's double was the first hit in such a matchup.

In his final All-Star appearance, Jones became the first 40-year-old to get a hit in an All-Star Game since Cal Ripken Jr. in 2001.

Now has 11 career hits in the All-Star Game, the most of any Yankee. Mickey Mantle had 10.

The only other St. Louis Cardinals player to triple in an All-Star Game was Hall-of-Famer Enos Slaughter.

By pinch-hitting in the fifth inning, the 19-year old became the second youngest to play in an All-Star game (Dwight Gooden was the only one younger).