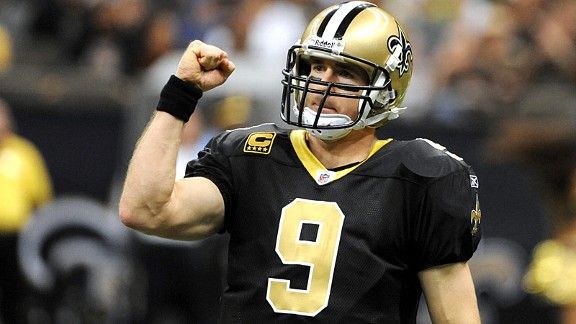 Drew Brees will be celebrating in New Orleans for at least five more years thanks to his new deal.Drew Brees and the New Orleans Saints have agreed to a five-year, $100 million contract, ensuring that the record-breaking quarterback will be lighting up the scoreboard at the Superdome for several more years to come.

With his new deal, Brees moves to the top of the current contracts list with an average annual value of $20 million per season.

Brees will be expected to put up numbers similar to last season in order to justify the $40 million he’ll earn in 2012. If he duplicates his 2001 stats, Brees will earn over $3 million per win and $85,000 per pass completion next year.

Since joining the Saints in 2006, Brees has been the most prolific passer in the league, leading all quarterbacks in passing yards, passing touchdowns, completions, attempts and completion percentage.

Brees has made the Pro Bowl in five of his six seasons with the Saints. The only other quarterback in the franchise's history to be named to the Pro Bowl was Archie Manning.

In the last six seasons, he has led the Saints to four playoff appearances and the franchise’s only Super Bowl title, igniting a franchise that was among the worst in the NFL in the previous decade before he arrived.

From 1993-2005, the Saints made the postseason just once and their 85 wins during those years ranked 25th out of the 28 teams that existed in that entire span. Since 2006, only five teams have more victories than the 62 that New Orleans has.

Brees and the Saints offense had a lot of success moving the ball on short-yardage passes last season. He ranked first in the NFL in completions, completion percentage and touchdowns on throws of 10 yards or fewer.

However, Brees’s record-setting season was partly a result of the huge improvement that he made from 2010 to 2011 on deep throws.

After tossing just 13 touchdowns and completing 46 percent of his passes that traveled at least 15 yards two seasons ago, he led the NFL with 18 touchdowns and a 58 percent completion rate on such throws last year.

There are still more records for Brees to break, believe it or not. He enters this season having thrown a touchdown in 43 straight games, four short of the NFL record set by Johnny Unitas from 1956-60. Brees can tie the record in Week 4 against his former team, the San Diego Chargers.