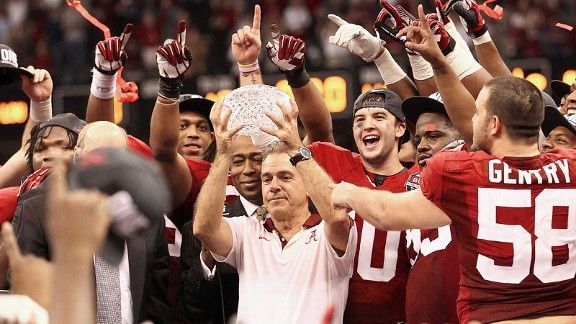 Alabama won't need to do too much damage on the road to repeat as BCS National Champions.

With the SEC media days underway on ESPNU, here are 10 notes you need to know about the 2012 SEC schedule:

• Defending-champion Alabama looks to repeat in 2012 with a very home-friendly schedule. The Crimson Tide play just one game in an opponent’s stadium during the first six weeks of the season and their final three games are all at Bryant-Denny Stadium.

• Arkansas will have the chance to knock off SEC West stalwarts Alabama (Sept. 15) and LSU (Nov. 23) at home. The Razorbacks haven’t beaten the two schools in the same season since 2000.

• For the first time since 1984, Auburn will open its season with two consecutive games away from home (Sept. 1 vs Clemson in Atlanta, Sept. 8 at Miss St). The Tigers started that 1984 season 0-2.

• Florida will play its first two SEC games on the road for the first time since 1985 (Sept. 8 at Texas A&M, Sept. 15 at Tennessee) and its trip to College Station will be its first regular season game played in the state of Texas since 1979.

• Georgia will go the entire month of October without playing on its home field (at South Carolina, open date, at Kentucky, vs Florida in Jacksonville) but it avoids both Alabama and LSU for the third-consecutive regular season.

• Kentucky will be busy as it opens the season with 10 straight games before an open date on November 10. Fortunately for Big Blue Nation, five of the first six will be played in the state of Kentucky (four home games, at Louisville).

• LSU will play eight of its 12 games in Baton Rouge, but its four road opponents all reached bowl games last season (Auburn, Florida, Texas A&M, and Arkansas). Also, the Tigers will open the season at home against an FBS school for the first time since 2006.

Mississippi State will be tested late in the season as four of their final five opponents went to bowl games in 2011 (at Alabama, Texas A&M, at LSU, Arkansas). Interestingly, the Bulldogs and in-state rival Ole Miss are the only SEC schools that will play AT both Alabama and LSU during the regular season.

• South Carolina will face a tough three-game stretch in October (vs Georgia, at LSU, at Florida) but following that matchup with the Gators, the Gamecocks will not leave their home state the rest of the way (three home games, open date, at Clemson).

• Tennessee will not play in an opponent’s stadium until September 29 at Georgia and only one of their regular season road trips will be longer than 300 miles from Knoxville (Oct. 13 at Mississippi St).