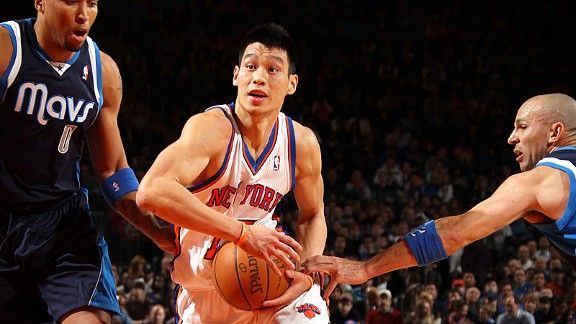 With Jeremy Lin now officially a member of the Rockets, is Dwight Howard next?

It’s official: Jeremy Lin is a Houston Rocket... but that doesn’t mean Rockets GM Daryl Morey is done wheeling and dealing. With Lin in the fold, how might he fit in a potential partnership with Houston’s other target, Dwight Howard?

In addition to being a defensive force, Howard is the best pick-and-roll finisher in the NBA. He averaged 1.38 points per play as the roll man on pick-and-rolls last season, best in the league among players with at least 35 plays.

On the surface, it might not appear Lin would be the ideal pick-and-roll point guard to pair with Howard. On all of his passes out of the pick-and-roll, Lin ranked in just the 40th percentile in points per play.

However, when going exclusively to the roll man, Lin ranked in the 72nd percentile (fifth of 35 point guards with 100 plays). That compares favorably to both Howard’s current and preferred point guards.

Orlando’s Jameer Nelson ranked 15th among that group of 35 point guards while the Nets’ Deron Williams came in at just 29th on points per play generated on passes to the roll man.

PLAYING OFF THE BALL

What about Lin playing off of Howard?

HowardDespite missing 12 games, Howard still led the NBA with 181 passes to spot-up shooters last season and commanded a hard double-team 5.8 percent of the time he posted up.

Only Andrew Bynum and LaMarcus Aldridge were doubled more frequently so the ability to spot up, spread the floor and punish teams for doubling Howard is important when playing alongside the big fella. Unfortunately, this is not an area in which Lin excels.

AS A BALL-DOMINANT GUARD

One of the keys to Lin’s success with the Knicks last season was his freedom to make plays. Of the 148 guards with at least 500 minutes last season, Lin’s usage rate of 27.4 ranked 10th. Some players he outranked? Chris Paul, Brandon Jennings and John Wall.

For comparison’s sake, Nelson’s usage rate has been under 23.0 in each of the past six seasons and Lin’s usage rate last season (27.4) would be the second-highest ever among Howard’s backcourt teammates.

The highest rate posted by any guard teammate of Howard’s was 28.4 by Steve Francis during Howard’s rookie campaign in 2004-05.

Despite all the success, plenty of mistakes came along with the freedom Lin enjoyed in New York. Lin averaged 4.7 turnovers per game as a starter, last among the 39 players who made at least 20 starts at the point last season.