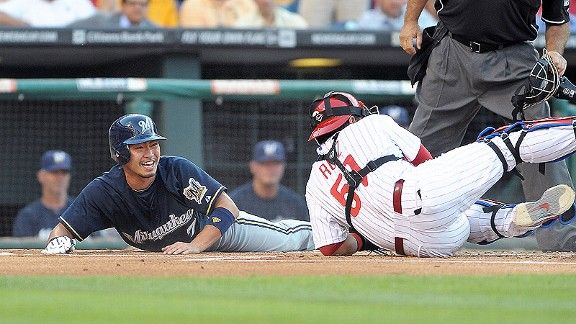 Carlos Ruiz tags out Norichika Aoki to save a run in the Phillies 7-6 win over the Brewers.The Philadelphia Phillies had little to celebrate at Citizens Bank Park this season, with a 19-29 home record that ranked last in the NL entering Tuesday. But they found some magic against the Milwaukee Brewers again tonight, scoring six runs in the eighth inning to rally from a season-high five-run deficit in the 7-6 win.

This was the second consecutive game that the Phillies won after trailing by three or more runs in the eighth inning or later. According to the Elias Sports Bureau, they had done that only once before in franchise history, with a pair of walk-off wins over the Pittsburgh Pirates at Baker Bowl in August 1899.

Carlos Ruiz had a three-run, bases-clearing double to tie the score at 6-6. The last Phillies player with a bases-loaded, game-tying double in the eighth inning or later at home was Ron Gant in 1999 against the Atlanta Braves.

Hunter Pence followed Ruiz with the game-winning single for his team-leading fifth go-ahead hit in the eighth inning or later this season. The rest of the Phillies have combined for only four such hits in 2012.

Zack Greinke did his best to keep the Brewers in the game with both his arm and his bat. He tossed seven innings of one-run ball and allowed just three hits, bouncing back after starting the month with a 9.00 ERA in his first four July starts.

Greinke worked the bottom of the strike zone, throwing sixty percent of his pitches in the lower third of the zone or below. The Phillies were hitless in 13 at-bats ending in a pitch to that location, including all five of his strikeouts.

Good news for Brewers fans is that Greinke appears to have put his road woes in the past.

He is 3-1 with a 2.54 ERA in his last eight starts away from Miller Park, a far cry from the 7.03 ERA he posted in his first five road starts this season.

Greinke also chipped in at the plate with his third career home run. It was the first time Cliff Lee allowed a homer to an opposing pitcher in his career.

Speaking of Lee, he was lucky to not get a loss in this game. He allowed 12 hits and four homers, matching his career-highs in both stats. Three of the four longballs came on the first pitch, becoming the first pitcher this season to allow three first-pitch homers in the same game.

The Washington Nationals improved to 8-3 versus the New York Mets this season, as Gio Gonzalez (7 IP, 0 ER, 2 H) earned his 13th win. Gonzalez fell behind 14 hitters 1-0 but battled back to retire 11 of them, allowing only one hit.

The Mets’ post-break slide continues as they have now dropped 11 of their last 12 games. R.A. Dickey (6 IP, 4 ER) lost for the first time in his last 17 starts, also snapping his 11-game win streak. He has a 6.49 ERA in July after posting a 2.15 ERA in the first three months of the season.

Jordany Valdespin tried to rally the Mets with his MLB-leading fifth pinch-hit homer in the eighth inning. The five pinch-hit homers are a Mets single-season record and two shy of the major-league record shared by Dave Hansen (2000 Dodgers) and Craig Wilson (2001 Pirates).