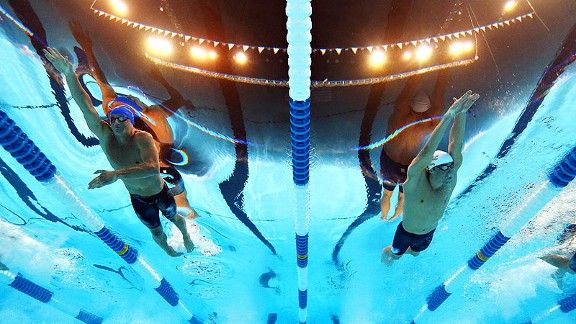 The 400m IM will be the first of two head-to-head races between Michael Phelps and Ryan Lochte in London (the other is the 200m IM). Lochte is the reigning world champion in the event and beat Phelps at last month’s U.S. trials, but Phelps owns the world record, which he set at the 2008 Beijing Olympics.

Phelps will swim seven events in London (200m and 400m IM, 100m and 200m butterfly, 3 relays), looking to add to his Olympic record of 14 gold medals and his total of 16 Olympic medals. He needs three medals to pass Russian gymnast Larisa Latynina as the most-decorated Olympian ever.

Phelps also has a chance to become the first man to win an Olympic swimming event three times. He has already won two golds in the 400m and 200m individual medleys and the 200m and 100m butterflies, and will be competing in each of those events in London.

Lochte is Phelps’ biggest rival and has arguably surpassed him as the world’s best swimmer since the 2008 Beijing Olympics. His ascent began in 2010 at the Pan-Pacific Championships, where he went a perfect 6-for-6, winning one more event there than Phelps.

He then won four individual golds and one relay gold at the 2011 World Championships, setting the world record in the 200m IM. It was the first long-course record set since high-tech suits were banned in 2010. Lochte has qualified for five events in London (200m backstroke, 200m and 400m IM, 200m freestyle, 4x200m freestyle relay).

Franklin certainly has the pedigree to rewrite the record books. She won five medals, including one individual gold in the 200m backstroke and two relay golds, at the 2011 World Championships at the age of 16. Later in 2011 she set the 200m backstroke short-course world record at a FINA World Cup meet in Berlin.

If she gets gold again at 200 meters, she would be the first woman to win two Olympic golds in the 200m breaststroke. She also could become the second woman to sweep the three breaststroke events, joining South Africa’s Penny Heyns in 1996.