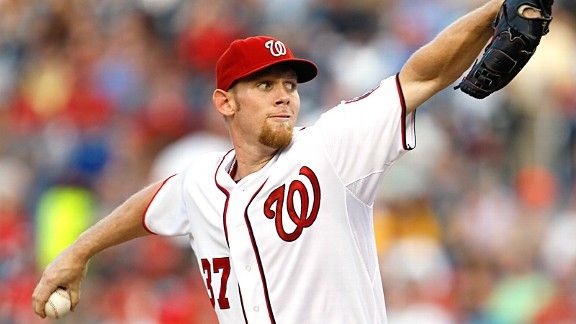 The Nationals have said they plan to shut Stephen Strasburg down at some point this season. We examine whether they should based on recent history of similar pitchers.

In all likelihood, 24-year-old Stephen Strasburg's season will end within weeks with the Washington Nationals likely in a fierce pennant race.

If the Nationals were to reverse course and allow Strasburg to pitch, would the workload hurt his performance? History suggests it wouldn't.

What the Numbers Say

Since 2001, 20 pitchers fit the profile of a young arm with a considerable workload. The criteria:

• The pitcher needed to be 23 years old or younger.

• It was the pitcher's first season throwing 150 innings.

• The pitcher had not previously thrown 150 innings in his pro career.

In general, the answer was no. In four of the five categories analyzed (ERA, strike percentage, miss percentage and WHIP), the median performance change was no more than five percent, a modest change at best.

If there is any trend, they improved their strikeout-to-walk ratio by more than 30 percent. Otherwise, their statistics lack a clear pattern, despite the polarizing nature of the innings-limit debate.

Even the following season, there was no defined trend -- only two of the 20 pitchers missed significant time (Brian Matusz last year, Michael Pineda this year). This provides evidence that the "risk of injury" argument is somewhat unfounded. One-quarter of these pitchers have won the Cy Young Award, and 16 of them are still active major leaguers.

In short, there appears to be little risk to letting Strasburg finish the season from a statistical perspective.

However, in his final seven starts, he was 5-1 with a 2.74 ERA. That stretch also saw improvements in his command, suggesting that it took Burnett a few weeks to get his "feel" back.

ZimmermannA more recent case is Washington Nationals pitcher Jordan Zimmermann, who had the surgery in August 2009. Upon his return, his numbers were alarming -- fewer than 4.5 innings per start and a 4.94 ERA in his seven 2010 starts.

These cases suggest that pitchers coming off Tommy John surgery tend to get better with time. The fact that Strasburg pitched with such dominance indicates that he got his "feel" back sooner than most.

One cannot expect him to improve this late in the season like Burnett and Zimmermann did, but one cannot predict a decline either.