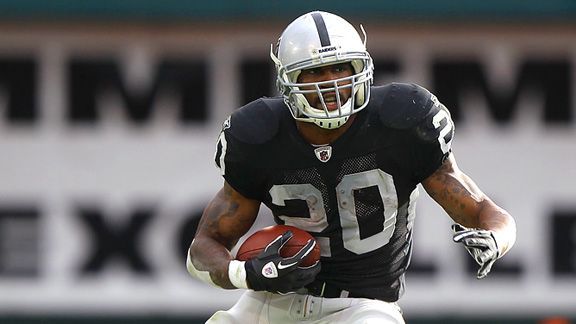 Darren McFadden and the Raiders hope to reach the postseason for the first time since 2002.The Dallas Cowboys and Oakland Raiders make their preseason debuts on Monday Night Football at 8 ET on ESPN. Below, we’ll take a look at the 2012 Raiders and what it will take for Oakland to be a contender for the first time in nearly a decade. For keys to the upcoming Cowboys season, click here.

The Oakland Raiders have failed to make the playoffs since representing the AFC in Super Bowl XXXVII. The nine-season playoff drought is the longest in franchise history and tied for the second-longest active streak in the NFL. Only the Bills have gone longer since last reaching the postseason (12 seasons).

Over that span, the Raiders have not finished above .500 and won an AFC-low 45 games. Only the Lions (44) have won fewer games since the start of the 2003 season. In order break their current stretch of futility, there are a few things that the Raiders will need to do:

In 2012, Carson Palmer should provide a nice boost to a position that has lacked stability in Oakland. He has thrown for at least 3,000 yards and 20 touchdowns in each of his last five full seasons and fell just short in 2011 after joining the Raiders midseason (2,753 Pass yds, 13 TD).

Oakland set NFL single-season records for penalties (163) and total penalty yards (1,358) in 2011. It was the third-straight season in which the Raiders led the league in penalties and if they hope to contend, that can’t continue.

Teams to reach the Super Bowl since 2008 had an average rank of 10th in “big plays” allowed during their Super Bowl seasons and five of the eight ranked among the league’s Top 6. Only the 2011 Patriots reached the Super Bowl after ranking outside the Top 20 (21st).