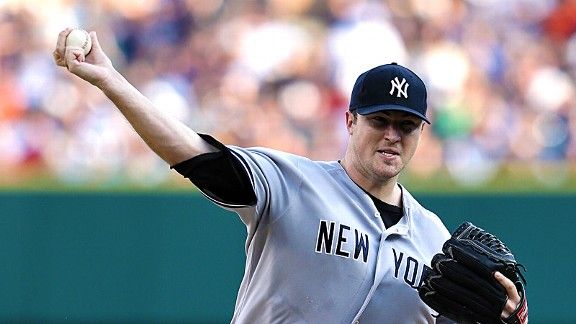 Expect Phil Hughes to throw an increased amount of changeups when the Yankees face the White Sox tonight.Phil Hughes’ pitching repertoire has been all over the place this season. He’ll put his newest style on the line Wednesday as the New York Yankees face the Chicago White Sox at 8 ET on ESPN2.

In April, Hughes featured a four-pitch mix, throwing fastballs, curveballs, changeups and cutters. He threw the changeup exclusively to lefties and the cutter mainly to righties.

In June, he abandoned the cutter. He hasn’t thrown it in a game since May 28 when he threw it just twice against the Angels.

He even had a start on June 15 against the Nationals in which he threw exclusively fastballs and curveballs – not a single changeup.

Since that start, Hughes began to work his changeup back into his repertoire, but he threw it almost exclusively to left-handed batters (as most righties do). Ninety-six percent of his changeups thrown from June 20 to August 12 were to left-handed hitters.

Then, in his last start against the Red Sox on August 17, Hughes drastically changed his approach yet again. He relied heavily on his changeup, throwing it 23 times – the most he’s ever thrown it in any start since at least 2009. He threw just seven curves in the start – his lowest total in a game this season.

His strikeout rate has returned to his pre-injury levels (7.6 K/9 this season), and he’s walking batters at the lowest rate of his career (2.1 BB/9 – 9th-lowest in AL) but he’s gotten bitten severely by the home run this season. He's allowed 28 homers, one shy of Tommy Hunter and Ervin Santana for the most in the Majors this season.

Another strange split has been his tremendous success against lefties this season. Righties have feasted on Hughes’ offerings however to the tune of a .988 OPS, by far the worst mark by a right-handed pitcher this season.

Hughes pitched well his last time out against the White Sox, pitching eight innings of six-hit, two-run ball for the win. He struck out eight batters, raising his K/9 to 8.5 for the season at that point.

Since that game, he has struck out just 5.8 batters per 9 IP.