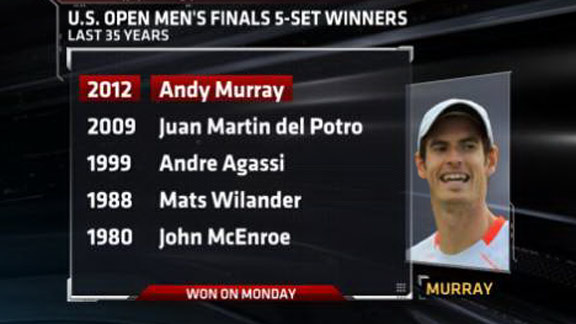 The fifth time was a winner for Andy Murray, who finally won a Grand Slam event after losing his first four finals, defeating Novak Djokovic in a five-set marathon in the U.S. Open Men’s Finals.

Among the most interesting statistical notes and trends from this match:

Murray is the first player to win the U.S. Open and an Olympic gold medal in the same year and the first British man to win a Grand Slam since Fred Perry won the 1936 U.S. Championship.

Murray won the first set tiebreak, 12-10. That's the longest tiebreak in terms of points in US Open Final history.

He’s the first player other than Roger Federer, Rafael Nadal, or Novak Djokovic to win a Grand Slam title since Juan Martin del Potro at 2009 US Open.

The 4-hour, 54-minute match time is tied for longest in final in US Open history (Mats Wilander defeated Ivan Lendl in 1988).

Murray joined del Potro as the only five-set winners in the U.S. Open Finals since 2000.