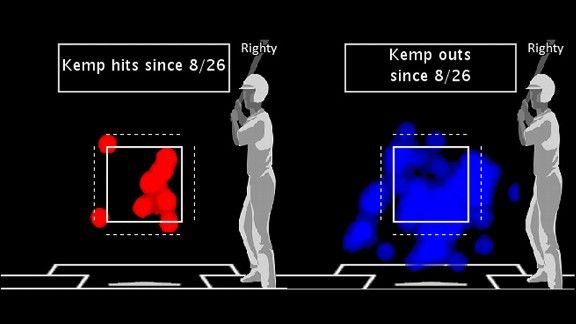 Matt Kemp is in a slump and the Dodgers have struggled right along with him.The struggles continue for Los Angeles Dodgers centerfielder Matt Kemp, to the point where the St. Louis Cardinals willingly walked Andre Ethier to load the bases for Kemp in extra innings.

He obliged by flying out and extending the game, which the Cardinals would go on to win and split the four-game series

Kemp went 1-for-13 with six strikeouts in the last three games of this series, though the Dodgers did manage to win two of those.

Kemp hasn’t had a multi-hit game since August 25. He’s 8-for-60 with one home run and 19 strikeouts since then.

What has plagued Kemp most during this slump?

Quite simply. Just about everything:

Kemp has missed on 27 of his last 44 swings against offspeed pitches, a 61 percent miss rate that’s well out of line with a miss rate of 39 percent entering this skid.

Since returning on August 31 after three days off following an injury when he ran into the fence trying to make a play, Kemp has seen more changeups than any hitter in baseball. His last hit against one came on August 8.

His out-to-hit ratio on pitches out of the strike zone prior to these struggles was 3.2-to-1.

But Kemp is also missing pitches he typically drives. Since August 25, he’s hitting just .229 when an at-bat ends with a pitch in the strike zone.

That’s 158 points below what he’d established in the first four-and-three-quarter months of the season.

Inability to drive the ball

Kemp’s ground-ball rate has increased from 41 percent pre-slump to 49 percent since. That’s come at the expense of him hitting line drives. He was hitting them at a 21 percent rate, but that has since dipped to 15 percent over his last 60 at-bats.

Kemp is having a hard time with pitches on the outer-half of the plate, or just off the outside corner. His 10th-inning flyout against Fernando Salas made him 3-for-25 against such pitches since August 26. The image atop this article illustrates Kemp's difficulties at getting hits on pitches to that area.

Next up for the Dodgers are the Washington Nationals, whose pitching staff has been fantastic throughout 2012. They’ve been great against Kemp throughout his career.

Kemp’s .225 career batting average against the Nationals is his lowest against any NL team.

He has only three at-bats in his career against Tuesday’s starter, Jordan Zimmermann, but one of them was quite notable- he hit a grand slam against Zimmermann in 2009.