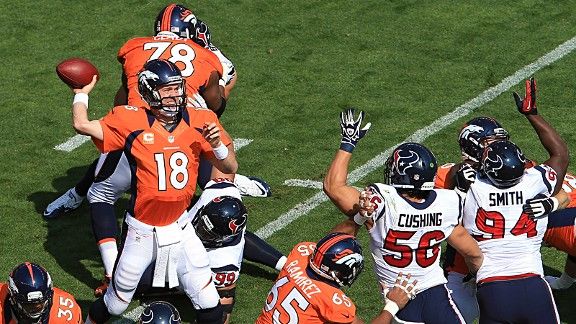 The Texans got to Peyton Manning just enough to win on Sunday.

The Houston Texans had just the right combination of play-action passing and heavy pass-rushing to work their way out of the struggles that preceded them.

The Texans were 2-16 all-time against Broncos quarterback Peyton Manning, 1-8 all-time in Week 3 games, and 0-2 when trying to improve to 3-0 the last two seasons.

But now they are unbeaten after three games for the first time in franchise history.

How did the Texans do it?

Four of Schaub’s five play-action attempts at least 10 yards downfield were accurate (three completions, one dropped pass, one underthrow). That led to a pair of touchdowns- a 60-yarder to Andre Johnson and a 52-yarder to Kevin Walter.

This went counter to how Schaub approached the play-action pass in Houston’s first two games of the season. In those two games, he averaged making a pass attempt of 4.3 yards in play-action. His average throw Sunday was 13.4 yards.

The Texans attacked Peyton Manning with a five-man rush on 16 of his dropbacks on Sunday.

Manning, who had completed 65 percent of his throws against a five-man rush in the first two games, was just 6-for-16 for 73 yards under such pressure on Sunday.

Manning broke an NFL record in defeat with his 64th game with at least 300 passing yards, surpassing the mark he shared with Dan Marino.

Manning did show some of the arm strength when throwing the ball down the field that he hadn’t shown earlier this season.

Manning was 3-for-6 for 99 yards and a touchdown when throwing the ball deeper than 20 yards downfield. He was 0-for-5 on pass attempts of that length in the season’s first two weeks.

Texans running back Arian Foster scored a touchdown for the seventh straight game, though this one game catching the ball, rather than rushing it.

The streak of seven straight games is a career high. Fister did rush for 105 yards, the 18th game in his career with at least 100 yards rushing. Foster has now run for at least 100 yards in four of his last five games, dating back to last season.