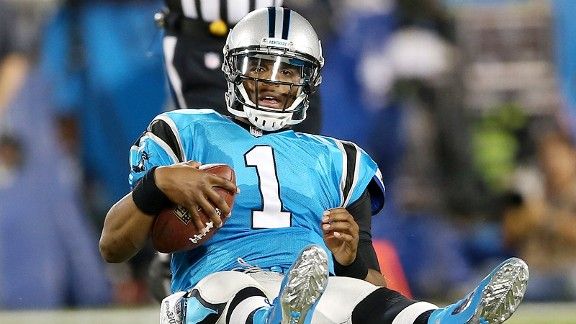 The Carolina Panthers are off to a slow start this season, but is Cam Newton to blame for their struggles?This is the third installment of a weekly NFL discussion that takes a closer look at one of the week’s hot topics. Today’s discussion focuses on whether Cam Newton is to blame for the Carolina Panthers slow start. The Panthers travel to Atlanta to take on the undefeated Falcons Sunday afternoon at 1 ET.

The NFL is a quarterback-driven league, plain and simple, so look no further than Cam Newton as the focal point for the Panthers’ 1-2 start.

Newton has thrown five interceptions through three weeks, or once every 16.6 attempts (30.4 attempts in 2011).

The only quarterbacks with more interceptions than Newton are Brandon Weeden, Jay Cutler and Michael Vick, who all have six. Newton would have joined those three if Saints cornerback Patrick Robinson hadn’t dropped a potential sixth interception in Week 2.

Newton has completed 38.9 percent of his passes on third down, the worst rate in the league among quarterbacks with at least 10 attempts on third down.

That ranks 22nd out of the 32 starting quarterbacks in the NFL and behind quarterbacks such as Mark Sanchez, Sam Bradford, Ryan Tannehill and Matt Cassel.

Newton is one of 18 quarterbacks with at least 10 attempts in the red zone, throwing for one touchdown and one interception. While it’s a small sample size, he’s the only one of those 18 who doesn’t have a positive touchdown-interception differential in the red zone.

Why the slow start for the Panthers? How about a quarterback who is turning the ball over, not converting on third down, and struggling in the red zone compared to other quarterbacks? Assessing blame starts with Cam Newton.

No, defense is the problem

How about looking on the other side of the ball to pin the blame on the Panthers’ struggles?

Carolina is currently ranked 27th in rush defense (139.3 yards per game) and has allowed the second-most yards after contact (241) in the league. They are allowing opponents to convert 46.3 percent of their third downs, tied for 26th in the league, and have forced only two turnovers this season.

The defense’s inability to get off the field has consistently put Newton and the offense in a tough spot. The Panthers’ average starting field position is their own 25-yard line, tied for second-worst in the NFL.

Only the Titans have possessed the ball less than the Panthers’ average of slightly more than 25 minutes per game. It’s no coincidence that the bottom five teams in the league in time of possession have a combined record of 3-12.

It’s easy to point the finger at the quarterback but in this case the defense deserves its share of the blame. If Newton had any faith in his defense, he might not be trying to do too much.