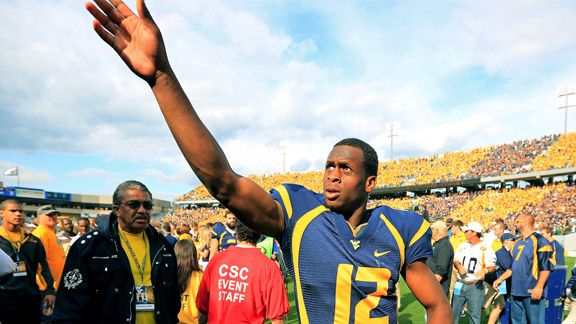 Geno Smith was the star attraction in the fireworks show in Morgantown Saturday.

If defenses were being put to the test in Saturday's Big 12 clash of high-flying offenses at Mountaineer Field at Milan Puskar Stadium, everyone failed. The offenses combined for 19 touchdowns, the most ever in a game involving FBS teams.

But no one in Morgantown came out of the 70-63 West Virginia Mountaineers win looking better than Geno Smith in what could have been the first Heisman Trophy-defining performance of the season.

Going back to the 2012 Orange Bowl, Smith has 26 touchdowns and zero interceptions and hasn't thrown for fewer than 323 yards in a game.

Compared to last year's Heisman winner, Robert Griffin III, through four games, Smith has 345 more pass yards with a better completion percentage and more touchdowns. And his team was still perfect while Griffin III's Baylor team was 3-1. Smith actually has the most touchdown passes in his team's first four games of any season since the turn of the century with 20.

West Virginia's Stedman Bailey turned 13 grabs into a school-record 303 yards and he didn't even have the most receiving yards in the game. Baylor's Terrance Williams also set school records with 17 receptions and 314 yards. Bailey also had five touchdown catches, tied for the second-most in a game by an FBS player since 2000 (Oklahoma State’s Rashaun Woods had seven in 2003). No Mountaineer player has ever had more receptions in a game than Bailey's teammate Tavon Austin, who had 215 yards himself.

We can't confirm when the last time opposing teams each had a 300-yard wide receiver. But the NCAA does note that a pair of Tulsa players, Rick Eber (322) and Harry Wood (318), did so in the same game against Idaho State on October 7, 1967.

For a program that took some beatings in its history versus powerhouses like Texas, Oklahoma and Nebraska, Baylor's defense broke some dubious school records today. It gave up 807 total yards, 656 of them through the air.

Baylor elected to send three pass rushers or fewer on 32 of Geno Smith’s 56 dropbacks. He completed 27 of 31 passes for 413 yards and four touchdowns when Baylor did that. He was under duress on just three plays and was not sacked when Baylor dropped eight into coverage.

It's not common that a team can score 63 points in a loss. The Bears' point total matches the FBS record for the most points scored in regulation by a losing team (Rice versus San Jose State in 2004; Toledo versus Western Michigan in 2011).

The sunny side of that stat is that Baylor's quarterback had to have a pretty memorable day as well. And Nick Florence did, setting school records with 581 pass yards and 575 total yards en route to five scoring tosses. But it's too bad he couldn't help out on defense.

Smith and Florence combined to throw for 1,237 yards, 16 yards shy of the NCAA single-game record by opposing players.

• Most total offense by a player: Geno Smith, 687 yards

• Most receiving yards by a player: Terrance Williams, 314