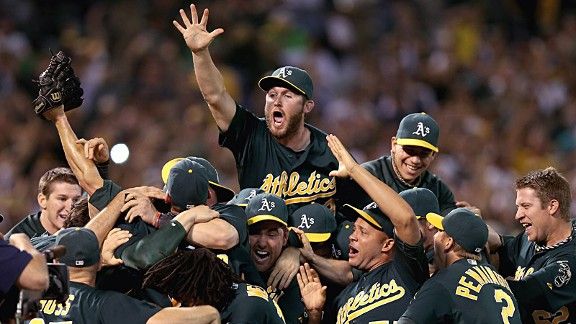 The Athletics trailed the Rangers by 13 games in the AL West at the end of June, but will win the division if they beat Texas on Wednesday.The ten playoff participants are set, but the AL East and AL West titles are up for grabs heading into the final day of the regular season.

The scramble for AL playoff seeding starts with an afternoon contest between the Texas Rangers and the Oakland Athletics. The teams are tied atop the AL West.

If Oakland wins Wednesday afternoon, it will cap one of the biggest comebacks in major-league history.

At the end of June, the A’s trailed the Rangers by 13 games for the AL West lead. According to Elias, a 13-game comeback would be tied for third-most by an eventual first-place team in MLB history. Two of the four teams to previously come from 13-or-more games back went on to win the World Series.

The Athletics will send rookie A.J. Griffin to the mound. Elias informs us that this is the first time since the start of divisional play in 1969 that a rookie pitcher has started a regular-season winner-take-all game.

The A’s wouldn’t be in this position without their young pitching staff. When Travis Blackley picked up the win Tuesday night, it was Oakland’s 53rd win by a rookie pitcher this season. Elias confirms that is the most in a major-league season.

AL East Down to Wire

With one game left to play the New York Yankees lead the Baltimore Orioles by one game in the AL East.

Like Oakland, Baltimore has made a late-season charge to get into position to win the division. The Orioles trailed the Yankees by 10 games after play on July 18.

According to Elias, the Yankees have never blown a lead of more than six games. In the Divisional Era, they only failed to win the AL East twice when they held an outright division lead any time in September. In 2010 they dropped to the Wild Card spot and in 1974 they finished second and missed the playoffs.

Buck Showalter continues to work his magic turning franchises around. In each of his first three managerial stints, with the Yankees, Arizona Diamondbacks and Rangers, his teams improved by at least 12 games from his first full season to his second. The Orioles have improved by 24 wins this season.

Chris Davis has hit a home run in six straight games. That is tied for the longest single-season streak in Orioles/Browns history. The last MLB player with a longer streak was Kevin Mench, who hit homers in seven straight games in April 2006.

The Yankees and Orioles have both lived by the longball in 2012. They are the top two teams in the majors in percentage of runs scored on home runs this season.

Highest Pct of Runs Via HR
This Season

If the Orioles win and the Yankees lose Wednesday, the teams would meet in Baltimore on Thursday to determine the AL East champion.