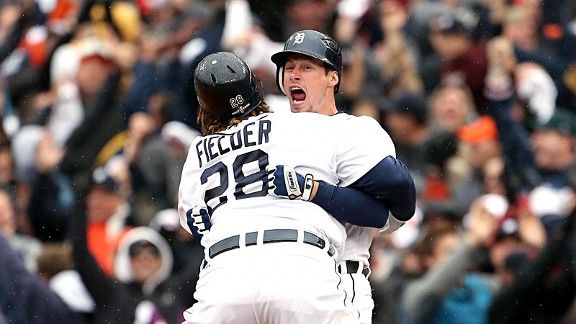 Don Kelly's game-winning RBI warranted a celebratory hug from Prince Fielder.Don Kelly isn’t the person you’d expect to come through in a big spot in the Detroit Tigers biggest game of the season. That’s not his usual role.

Kelly’s primary function in 2012 was to serve as what amounted to a defensive closer or mop-up man. The Tigers were 53-22 in the regular season when he played, 38-8 when he came in as a substitute (he was often called upon with the Tigers ahead).

Kelly scored the tying run on Ryan Cook’s wild pitch, then drove in the winning run with a game-ending sacrifice fly. That capped an unlikely statistical success story, one that might not have happened had another team claimed him when he was designated for assignment in August.

The sacrifice fly was Kelly’s first go-ahead RBI all season, his first since a go-ahead home run in Game 5 of the 2011 ALDS against the New York Yankees.

It’s the first time he’s EVER had a go-ahead RBI in the seventh inning or later.

How unlikely an RBI was this? Kelly had been unsuccessful in his previous eight tries at getting a runner in from third base with less than two outs. That included a turn against the same pitcher he faced Sunday-- Grant Balfour-- on May 10.

But on this occasion, he was able to get enough of a 93-mile-per-hour fastball to muscle it deep enough to plate the winning run.

That too was unusual. Kelly had taken 55 swings against pitches of that speed or faster, but had only put 13 into play. His 24 percent “in-play rate” was 14 percentage points below the major-league average against those pitches.

Stat of the Day: An odd way to score runs

The Tigers scored five runs on Sunday with only two RBI. That's tied for the most runs scored in a postseason game with two or fewer RBI.

The Cardinals scored five runs with two RBI in Game 3 of the 2006 World Series against none other than the Tigers.

The Elias Sports Bureau notes it's the most runs scored by one team in a postseason game without an RBI hit.