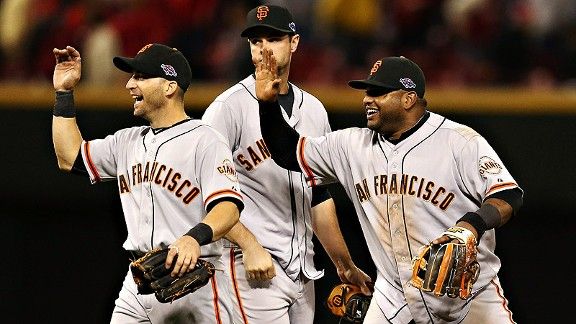 The Giants' offense was quiet once again, but they did enough to survive to see Game 4.The San Francisco Giants offense continued its struggles in the NLDS, but got some help to pull out a season-saving win despite just three hits.

The Giants' first run came without a hit in the third inning and their final run came courtesy of a Scott Rolen error in the 10th.

They are the first road team to win a postseason game with fewer than four hits since the 2001 New York Yankees against the Oakland Athletics in Game 3 of the ALDS in the famous Derek Jeter relay game.

Hits Come Few and Far Between

The Reds pitching staff held the Giants to one hit through the first nine innings. According to the Elias Sports Bureau the Giants are the third team in MLB postseason history to win a game with only one hit through nine innings after getting two hits in the 10th. The 1974 Oakland Athletics and 1947 Brooklyn Dodgers both won in nine innings despite only having one hit.

After starter Ryan Vogelsong allowed three hits and a run in the first inning, the Giants pitching staff combined to allow just one hit over the final nine innings.

The against-the-odds win for the Giants wasted a stellar start by Homer Bailey, who rode the momentum from his no-hitter a couple of weeks ago by tying his career high with 10 strikeouts, while allowing only one hit (a Marco Scutaro single) in seven innings.

The only other pitchers to allow one hit or fewer in at least seven innings while striking out double-digits are Roger Clemens, Orlando Hernandez and Mike Mussina.

Bailey got ahead of Giants hitters, starting the first 13 and 19 of the 24 fitters he faced with a strike.

According to the Elias Sports Bureau, Bailey also tied the postseason record with six consecutive strikeouts. It was done four times previously.