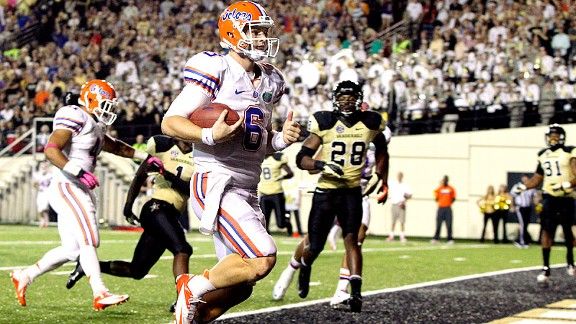 Jeff Driskel set the Florida rushing record for a quarterback with 177 yards vs Vanderbilt.The Florida Gators improved to 6-0 for the first time since 2009 with a 31-17 win over Vanderbilt on Saturday. They are one win shy of their total from all of 2011.

After spotting the Commodores an early seven-point lead, Florida scored 21 unanswered points to take control of the game. The Gator’s offensive surge was led by quarterback Jeff Driskel, who set the Florida record for rushing yards by a quarterback with 177, topping the 166-yard effort from Tim Tebow against Mississippi in 2007.

Driskel gained 150 of his 177 rushing yards on six zone read runs, including his 70-yard touchdown run to ice the game with 2:20 left in the fourth quarter.

On the season, Driskel is averaging 16.9 yards per rush on 15 zone read rushes. Over half of these runs have gained at least 10 yards.

Despite passing for just 77 yards on 20 attempts, Driskel accounted for a career-best 63 percent of Florida’s total offense against Vanderbilt.

Vanderbilt tried to stack the box against the Gators, putting seven or more defenders in the box on more than half of Driskel’s and Mike Gillislee’s 28 rush attempts. Against the added defenders, the duo still averaged 8.8 yards per rush.

Against seven or more defenders in the box in conference play this season, Driskel and Gillislee are averaging a combined 6.2 yards per rush, and have been hit at or behind the line of scrimmage on just 31 percent of their designed rush attempts.

Florida hosts South Carolina on Saturday and ESPN’s College Gameday will be there. This is the first top-10 matchup between these two teams in 33 all-time meetings. The Gamecocks have beaten Florida the last two meetings but have never defeated the Gators three straight times.

Look for South Carolina to continue to stack the box against Florida. Florida runs on 69.9 percent of its plays, the highest percentage in the SEC. Against Georgia in Week 6, South Carolina had seven or more defenders in the box on 75 percent of the Bulldogs’ rush attempts.

South Carolina must limit Driskel’s big rushes and force him to pass. Driskel is averaging 14.7 yards per carry on designed running plays and 8.8 yards per rush on scrambles. He has at least one rush that has gained 20 yards or more in five of six games this season.

Saturday’s showdown for the top spot in the SEC East will be won or lost in the trenches. South Carolina has one of the top rushing defenses in the country, but has yet to face a dynamic duo like Gillislee and Driskel this season.