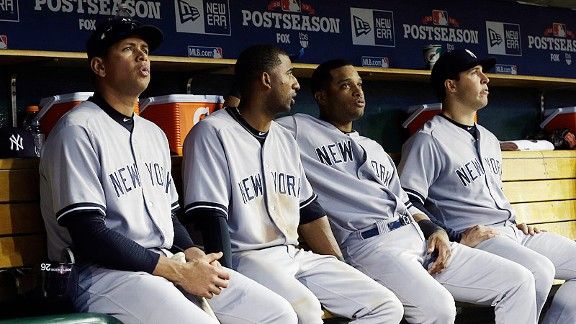 Alex Rodriguez and his teammates will have an eventful offseason.

There will be much scrutiny of the most famous franchise in sports, whose season ended in ignominious fashion with elimination in the ALCS by the Detroit Tigers on Thursday night.

The Yankees never led in the series, only the second time in their history that they’ve been beaten in that fashion (the other was in the 1963 World Series) and had some of their weaknesses exposed in October.

The Yankees had played 36 straight postseason series without being swept. The Elias Sports Bureau notes that is the longest such streak in major-league history.

The Yankees .188 batting average in the 2012 postseason is the lowest in MLB postseason history by any team that played at least seven games.

They scored just 22 runs in nine games, for an average of 2.4 runs per game. That's the fourth-fewest runs per game in a single postseason by any team that played at least seven games.

How ugly was the final game?

How did this happen?

The Yankees offense disappeared in the postseason. The combination of Alex Rodriguez, Nick Swisher, Curtis Granderson, and Robinson Cano went a combined 14-for-125 with one home run.

Rodriguez was 3-for-25 with 12 strikeouts and was 0-for-18 against right-handed pitching this postseason. He missed on 20 of the 44 swings he took against righties.

Cano endured a 29 at-bat hitless drought, the worst in major-league history for a player in postseason play.

The Baltimore Orioles and Detroit Tigers threw nearly two-thirds of their pitches to him on the outer-third of the strike zone, or off the outside corner. Of the 37 outs Cano made this postseason, 29 were on pitches to that area.

Granderson was hitless in 11 at-bats in the LCS, the third-worst 0-for by a Yankees player in a postseason series (surpassed by Mark Teixeira’s 0-for-14 in the 2010 ALCS and Joe Gordon’s 0-for-12 in the 1952 World Series). Opponents finished Granderson with offspeed stuff. He made 19 of his 27 outs this postseason on curves, sliders, and changeups.

Swisher was 1-for-5 with runners in scoring position, with the hit coming with the Yankees down by six runs and the four outs coming when the score of games was within two runs.

Swisher is 2-for-36 in his postseason career with runners in scoring position. His .056 batting average in those situations is the worst all-time.

The Yankees scored in only three of 39 innings (7.7 percent) in the ALCS. According to Elias, that is the lowest percentage of innings with a runs scored in a single postseason series since the 1966 Dodgers scored in 2 of 36 innings in their loss to the Orioles.

The historical precedent for the Yankees being swept in a postseason series is that they come back strong the next year.

In 1922, they were swept by the New York Giants (though one game ended tied) and bounced back by winning the World Series the next year.

In 1963, they were swept by the Los Angeles Dodgers, but returned to the World Series in 1964, only to lose in seven games to the St. Louis Cardinals.

In 1976, they got swept by the Reds, but with the help of free-agent signee Reggie Jackson (who hit three home runs 35 years ago Thursday) beat the Los Angeles Dodgers in each of the next two World Series.

In 1980, they were swept in the LCS by the Kansas City Royals. They went a step further the next season, but blew a 2-0 lead and lost to the Dodgers in the World Series.

Look for the Yankees to make an attempt to get younger. The average age of the Yankees roster was 32 years old, oldest in the majors.

The Yankees will also face a decision on what to do about Rodriguez, whose OPS has declined in each of the last five seasons.

Rodriguez ranks 35th in position player Wins Above Replacement since the start of the 2009 season.