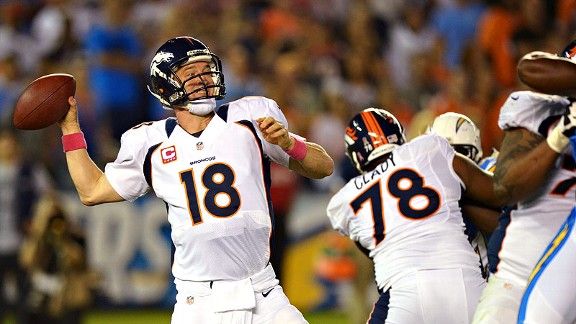 Peyton Manning has improved his deep passing in his last four games.Peyton Manning’s arm strength was questioned early in the season as he was coming back from neck surgery, especially when he struggled to make downfield throws in his first two games.

Manning failed to complete each of his five attempts on throws traveling more than 20 yards downfield over that span, which included three interceptions on such throws against the Atlanta Falcons on Monday Night Football.

He has silenced the critics since Week 2, completing 11-of-17 deep passes with four touchdowns and zero interceptions.

Brandon Stokley has benefitted from Manning’s recent success on deep passes, catching both of his targets on throws of such distance for touchdowns since Week 2.

Manning beat split-safety coverage against the Houston Texans in Week 3 and connected with Stokley on a 38-yard touchdown.

Manning has been successful targeting Stokley this season, especially when he is lined up as a slot receiver.

The Saints could have their hands full with the duo on Sunday. New Orleans ranks among the bottom 10 teams in the league in receptions, receiving yards, touchdowns and first downs allowed to receivers lined up in the slot this season.