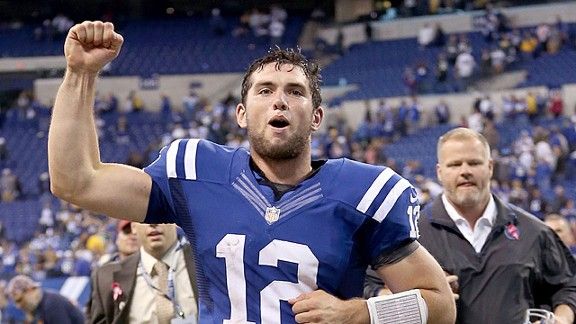 Andrew Luck led another late game-winning drive for the Colts on Sunday.With another comeback win on Sunday against the Miami Dolphins, Andrew Luck appears to be living up to the hype as both a No. 1 pick and a replacement for a franchise icon.

With the game tied at 20 early in the fourth quarter, Luck drove the Indianapolis Colts to the Miami 25-yard line, where Adam Vinatieri kicked the eventual winning 43-yard field goal.

These late-game heroics are nothing new for the rookie. This was the fourth time Luck led a game-winning drive in the fourth quarter or overtime this season. That’s as many as the four other rookie starting quarterbacks (Ryan Tannehill, Russell Wilson, Robert Griffin III, Brandon Weeden) have combined.

Among rookies since the merger, only Vince Young and Ben Roethlisberger have had more with five each.

Luck threw for a rookie-record 433 yards in the win, breaking the mark set by Cam Newton last year. Luck now has four 300-yard passing games this season, matching Peyton Manning for the most by a rookie. He also has 2,404 passing yards this season, the most of any rookie through his team’s first eight games.

With a 5-3 record, Luck appears to be headed for another entry in the record books. No rookie quarterback picked No. 1 overall has finished his rookie season with a winning record, and the most wins is seven by Sam Bradford in 2010.

Why was he so successful again on Sunday versus the Dolphins?

Andrew Luck vs 4 or Fewer Pass-Rushers
This Season

Luck took advantage of a Miami defense that sent four or fewer pass-rushers on more than 60 percent of his drop-backs.

Despite struggling against a standard pass rush in his first seven games, Luck was able to complete nearly 70 percent of his attempts against Miami, including a go-ahead touchdown in the third quarter to T.Y. Hilton.

Luck’s mobility helped him escape the Dolphins' front-seven pressure. He completed all six of his passes on throws outside the pocket and is now 11-for-12 on such passes over his past two games, averaging 14 yards per attempt.

Another key for Luck was his ability to use the run fake, completing 8 of 11 passes with a touchdown using play-action. Entering Sunday, Luck had only one touchdown and had completed less than 60 percent of his attempts on play-action.

Luck kept the chains moving with an excellent performance passing on third down. He was 13-of-16 for 204 yards with a touchdown on third down against the Dolphins after barely completing half of his passes on third down in his first seven games.