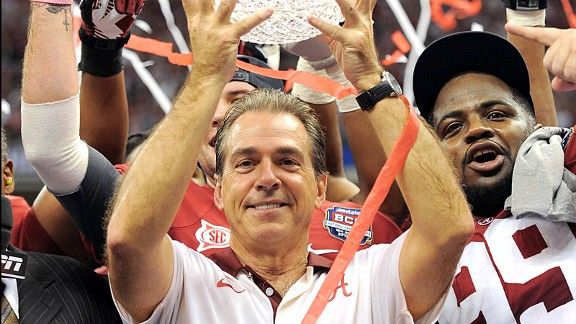 Nick Saban and Alabama are well on their way to playing for another BCS Championship.With it’s comeback win Saturday in Baton Rouge, Alabama moved one step closer to raising the crystal football for the second straight season.

Most Weeks at No. 1 in BCS Standings

1-- Alabama is atop the BCS Standings for the fourth straight week and the 10th time in school history. That ties the Crimson Tide with LSU for the fourth-most weeks at No. 1 in the BCS.

2-- With Boise State dropping out of the BCS Top 25 for the first time since 2007, Alabama also takes over the title of the longest active streak in the BCS rankings.

The Crimson Tide has appeared in 36 straight BCS releases. Oregon (32), LSU (28) and Stanford (22) are the other three schools that have streaks dating back to 2009 or earlier.

3-- With Oregon passing Notre Dame to take over the No. 3 spot in the BCS, this marks the third straight week that a team ranked in the Top-3 in the BCS standings has fallen after winning their game.

It’s the first time in BCS history that this has happened three times in the same year. In the first 14 years after the BCS was introduced in 1998, a Top-3 team dropped after winning a total of 16 times and never more than twice in the same season.

4-- No. 8 South Carolina has been in the BCS Top-10 in four of the last five releases dating to last season. Before finishing the 2011 season at No. 9, the Gamecocks had only been in the Top-10 twice in 14 years.

Such a high ranking hasn’t been a sign of future success for the Gamecocks. South Carolina is 1-3 when playing as a BCS Top-10 team, with the only win coming against Nebraska in the Capital One Bowl last season.

5-- Four new teams moved into the BCS standings, led by UCLA, which entered the rankings at No. 18 after beating previously-ranked Arizona 66-10. This is the first time the Bruins have been in the BCS Top 25 since the end of the 2006 season.

Better yet for UCLA fans – the Bruins rank ahead of cross-town rival USC for the first time since 2001. The Trojans fell from No. 17 to No. 19 after losing to Oregon.