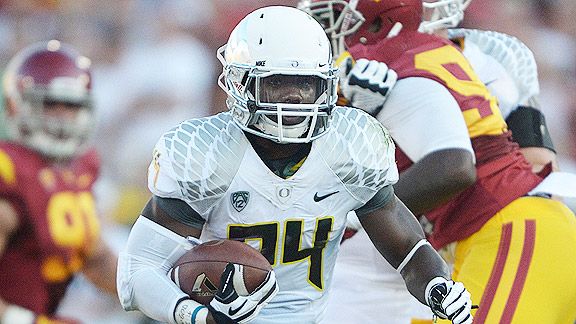 Kenjon Barner has put up eye-popping numbers for Oregon this season, but hasn't had to contend with a defense as good as Alabama's.

Alabama and Oregon rank first and second in every major human poll entering this weekend and have two of the best units in all of football. Which is better?

Oregon’s offense is the best unit in college football this season. The Ducks average 54.3 points per game, best in the nation, and have not scored fewer than 42 points in a game this season. Oregon has scored at least 30 points in 22 straight games, which is tied for the second-longest streak in the FBS era. - S.K.

What about Alabama’s defense? The Tide lead the nation in scoring defense for the second straight season despite losing six players from last season’s defense to the NFL Draft, including four in the first 35 picks. There have been only three other college defenses that have produced four players in the first 35 picks and no team has had more. - T.P.

Oregon does not even need to reach the red zone in order to score. Oregon has 19 touchdown plays longer than 20 yards this season, second in FBS behind Georgia. The Ducks have 93 such touchdowns since Chip Kelly took over in 2009, four more than any other FBS team.

Alabama’s defense does not give up long touchdowns. The Tide have allowed one touchdown longer than 20 yards this season, tied for the fewest in FBS and have not allowed a rushing touchdown of this length against an FBS opponent since Oct. 23, 2010, against Tennessee.

Do you think Alabama will be able to slow down Heisman contender Kenjon Barner? He rushed for 321 yards and five touchdowns last week against USC, and has rushed for 100 yards in each of his last five games despite only playing in the fourth quarter twice.

100 yards against Alabama? There have been two players who have rushed for 100 yards against Alabama since the start of the 2008 season. That is seven fewer than any other FBS team. Granted, the last one was last week when Jeremy Hill rushed for 107 on 29 rushes, but the last one before Hill was in 2010. Remember, Oregon averaged 2.3 yards per rush against Auburn in the BCS Championship Game.

Oregon showed what it is capable of when it plays four full quarters last week at USC. Oregon averages more points in the first half (36.0) than 92 FBS teams average in a game. If the Ducks continued their first-half pace, the Ducks would average 72 points and 728.2 yards per game. Those numbers would crush the FBS record for points (56.0 by Army in 1944) and yards (624.9 by Houston in 1989) per game in a season.

If those Ducks can move up in the computers, maybe they'll get to tangle with the Tide in Miami and settle this debate on the field.