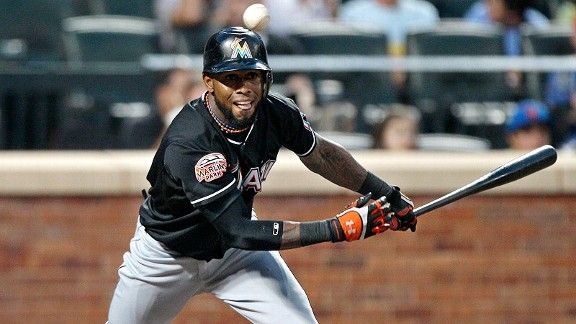 Jose Reyes could be bringing his bat to a new location in 2013.It is awards week in baseball and the award for the biggest deal of the offseason may have come Tuesday.

Let's take a look at a couple key storylines related to the potential megatrade between the Toronto Blue Jays and the Miami Marlins.

Marlins would be dumping money, Blue Jays spending it

It didn’t take long for the Marlins to give up on the idea of playing with a $100 million payroll.

In the previous four seasons, the Marlins ranked no higher than 24th in Opening Day payroll, but averaged 81 wins in that span.

They entered last season with a $118 million payroll, seventh-highest in the majors but finished with 69 wins. The six teams above them in payroll had much more success (with the exception of the Boston Red Sox), averaging 86 wins between them.

The Marlins win total tied for the fourth-fewest by a team with a team with a $100 million payroll (the Red Sox also had 69 wins last season).

The Blue Jays could enter new territory this season in terms of Opening Day payroll. They are one of 12 teams that has never opened the season with $100 million in commitments. Their largest payroll at the start of the season was $97.8 million in 2008, a season in which they won 86 games, but finished fourth in the mighty AL East.

What would the Blue Jays be getting for their money?

What are the Blue Jays getting for the more than $160 million they’re making in payroll commitments?

From a statistical perspective, they’re getting a group of players whose performance in 2012 was not up to their peak standards.

The biggest names in the reported deal: Mark Buehrle, Josh Johnson and Jose Reyes, combined to be worth 9.1 Wins Above Replacement in 2012.

Reyes, who has a history of injuries, was worth 2.8 WAR, the third time in the past four seasons he’s been below three Wins Above Replacement.

Buehrle brings a lot of mileage on his arm. He’s pitched at least 200 innings in 12 straight seasons. Buehrle’s 2,627 2/3 innings pitched in that 12-year span are the most in the majors.

One bugaboo that comes with Buehrle -- he doesn’t have a great history against the New York Yankees and Red Sox. He’s 7-16 with a 5.27 ERA combined against those teams, including 1-8 with a 6.38 ERA against the Yankees.

Johnson has a good history against the AL East (he’s 4-1 with a 2.64 ERA in nine starts against the Blue Jays division rivals).

Johnson ranked 29th among the 46 NL ERA-title qualifiers with his 3.81 ERA, but his combined strikeout, walk, and home run totals produced a Fielding Independent Pitching (an ERA estimator known as FIP), of 3.40, 10th-best among that same group.

Reyes struggled early in 2012 both offensively and defensively, but closed the year strong.

The Blue Jays may look to move Reyes, who thrived in the No. 3 spot, back into the leadoff spot in the batting order. Their leadoff hitters had a .296 on-base percentage and .650 OPS last season, both fifth-worst in the majors.

The one area in which the Marlins may have won the trade would be in shortstop defense. They give up Reyes, who ranked next-to-last among shortstops with -17 Defensive Runs Saved (a stat that measures the ability to turn batted balls into outs and convert double plays).

The Marlins Yunel Escobar ranked fourth in the majors with 15 Defensive Runs Saved.

--Mark Simon, Katie Sharp and Will Cohen contributed to this post.