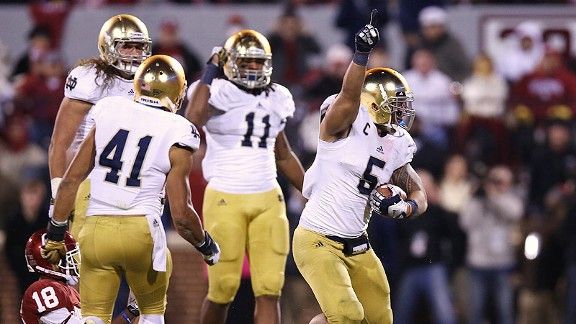 With one more win, Manti Te'o (right) and Notre Dame will play for the right to be No. 1.(USC hosts Notre Dame on Saturday at 8 ET on ABC.)

If the Notre Dame Fighting Irish can win on the road against the USC Trojans. History could, again, repeat itself.

Notre Dame is one win from playing for the BCS Title thanks in larger part to its defense. The Irish have conceded a touchdown on 6.7 percent of their opponents’ possessions, the lowest percentage in FBS this season.

Notre Dame’s red-zone defense also is the best in the nation, allowing a touchdown on 24.1 percent of their opponents’ drives inside the 20-yard line. (Opponents have seven touchdowns and five turnovers in 29 red-zone possessions.) That’s the lowest percentage for any FBS team in the last eight seasons.

The defense is led by senior linebacker Manti Te’o. With two more tackles, Te’o will join Bob Crable as the second Notre Dame player with three 100-tackle seasons. Te’o also leads the Irish with six interceptions after not having any in his first three seasons.

Notre Dame’s defense will be tested one more time, this time by one of the best wide receivers in the country. USC’s Marqise Lee has more receiving yards (821) in his last four games than 52 FBS teams during that time span. Lee has gained more yards after the catch (837) than any player from any BCS-AQ school, and leads FBS with eight 100-yard receiving games. However, only one player this season has 100 yards receiving against Notre Dame, Jalen Saunders from Oklahoma.

However, Lee will not have Matt Barkley throwing to him – the senior QB will not play because of a sprained shoulder. Since 2002, USC’s only loss to Notre Dame came in 2010 when Barkley (then a sophomore) had a sprained ankle and did not play.

Without Barkley, USC may turn to its running game. The Trojans are averaging 160 rushing yards per game, and has gained 10 yards or more on almost 17 percent of their rush attempts. Curtis McNeal has 324 yards in USC’s last two games, but he’ll face a Notre Dame defense that has allowed just three running backs to rush for 80 or more yards this season.