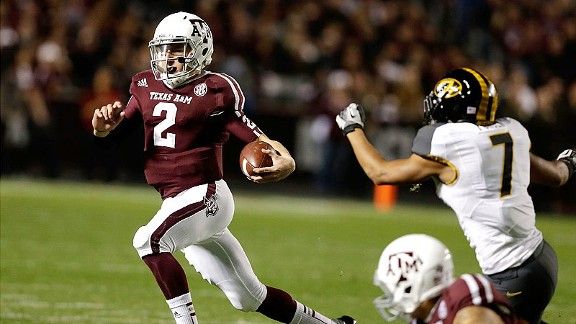 Missouri found out just how dangerous Johnny Manziel can be when he gets outside the pocket.

Johnny Manziel finished his regular season in style, completing 32 of 44 passes for 372 yards and three touchdowns in Texas A&M's 59-29 win against Missouri. He also ran for 67 yards and two touchdowns.

Manziel’s 439 yards of total offense in the game pushed his season total to 4,600, breaking the SEC single-season record held by Cam Newton in his 2010 Heisman Trophy season.

When Newton broke the record in 2010, he supplanted Tim Tebow’s Heisman Trophy season in 2007.

Manziel has been putting up impressive numbers all season. He had three games in which he had at least 300 passing yards and 100 rushing yards, the most for any player in a single season since 2000.

The rest of the nation has had eight such games the entire season.

Manziel also has six games with at least two touchdown passes and two rushing touchdowns. That's tied with Tebow in 2007 for the most such games in a season since 2000. Collin Klein is second in FBS this season with three such games.

But what makes Manziel the Heisman frontrunner has more to do with the style in which he plays than the raw numbers that he is amassing.

Manziel has an uncanny ability to make plays happen when things break down. As Alabama Crimson Tide coach Nick Saban told the media earlier this season: “He is very instinctive. He has a unique ability to extend plays and seems to know when to take off and run it.”

Look no further than Manziel’s “Heisman Moment” against Alabama when he bobbled the ball then scrambled to his left and threw back across the middle for a 10-yard touchdown to Ryan Swope.

This season, Manziel has completed 60 percent of his passes with eight touchdowns when scrambling out of the pocket.

To put that into perspective, fellow SEC quarterbacks AJ McCarron, Zach Mettenberger, Aaron Murray and Connor Shaw have four passing touchdowns combined when forced out of the pocket and are completing just over 40 percent of their passes in those situations.

Against Missouri on Saturday, Manziel completed 10-of-12 passes for 155 yards and two touchdowns when forced out of the pocket, including 5-of-6 passes on third down.

Manziel also makes plays with his legs when forced to improvise. He has gained 784 of his SEC-leading 1,181 rush yards on scrambles.

That's 43 more yards scrambling than Braxton Miller, Marcus Mariota and Klein have combined. Manziel has scrambled for 35 first downs this season, including 20 first downs on third down.

On third down, Manziel has converted 50 percent of his running or passing attempts. As a result, Texas A&M leads FBS with a 55 percent third-down conversion rate.

In the Aggies’ win against Alabama, Manziel converted 9-of-13 third down chances (69 percent), which was the highest conversion percentage for a quarterback against Alabama in the last nine seasons.

Whether Johnny Football wins the Heisman is yet to be determined, but it is safe to say that he has scrambled his way to a freshman season to remember.