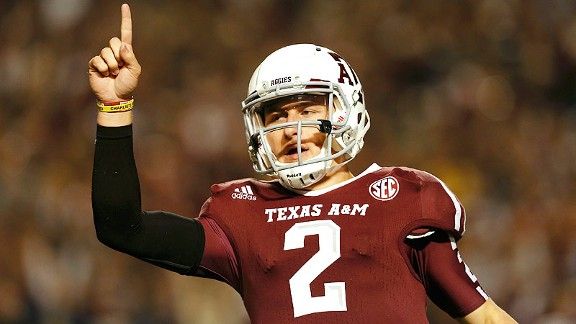 Manziel had 4,600 total yards in 2012, but a relatively low amount came when the score was close.

Texas A&M freshman Johnny Manziel emerged from the 2012 season as the Heisman frontrunner after accounting for 4,600 total yards, 43 TD and having an integral part in one of the season’s most memorable moments – the Aggies upset win at then No. 1 Alabama. Manziel is viewed as the best of a stellar group of freshman QB, which also includes UCLA’s Brett Hundley and Oregon’s Marcus Mariota.

His season has been compared to that of the 2010 Heisman winner Cam Newton, who set an SEC record with 4,327 yards – a mark Manziel broke in two fewer games.

But the numbers tell a different story when examining them closely.

Mariota played just two games against ranked teams and had 3 TD. He also gained only 6.3 fewer yards per game. In 2010, Newton faced, and beat, an amazing seven ranked teams, averaging 309.0 total yards per game and accounting for 25 TD.

On the other hand, Manziel had the lowest percentage of output when the game was truly in doubt (when his team was tied or the margin was within seven points). Just 44.4 percent of Manziel’s total yards and 37.2 percent of his TD (16) came in this situation. This is where the comparisons to Newton fall well short.

In 2010, 65.6 percent of Newton’s total yards and 31 of his 50 TD (62.0 pct) came when Auburn was tied or in a game that was within seven points. Almost as impressive is how well Hundley performed this season under those situations.

Does this mean Manziel should not, or will not, win the Heisman? Of course not. But in this era of scrutinized performance, some may have decided to cast their historic Heisman vote for LB Manti Te'o of No. 1 Notre Dame, as opposed to a freshman who took the season by storm in early November.