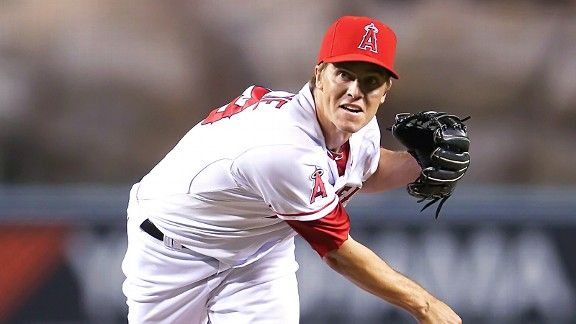 ZackGreinke is on the verge of taking his pitching talents to the Dodgers.

The free-spending ways of the Los Angeles Dodgers' new ownership may continue into this offseason in a big way, based on the news that the team is reportedly close to signing starting pitcher Zack Greinke to a contract that will pay him upwards of $147 million.

Let's take a look at some of the notes and numbers affiliated with this potential big-ticket acquisition.

Greinke’s contract would be the second-largest signed by a pitcher in terms of total value, trailing only the $161 million contract that CC Sabathia signed befroe the 2009 season with the New York Yankees (Sabathia later opted out of that deal).

It would be the largest contract ever signed by a right-handed pitcher.

Greinke would become the fourth player on the Dodgers' payroll whose contract has an average annual value of at least $20 million, joining Adrian Gonzalez, Carl Crawford, and Matt Kemp.

That mark is currently held by the 2008 Yankees, whose start-of-season payroll was $209 million.

Greinke could make them even more impressive.

Greinke’s strengths are in his peripheral numbers – his ability to get strikeouts, while avoiding both walks and home runs allowed.

Greinke’s 824 strikeouts over the last four seasons rank fifth in the majors. His 4-to-1 strikeout-to-walk rate over that same span ranks fourth-best among those with at least 500 innings pitched.

FIP, which stands for Fielding Independent Pitching, is an ERA estimate based on those three stats and presuming a defense that allows a league-average batting average on balls in play (BABIP).

Greinke’s FIP ranks tied for third, even with Justin Verlander and Roy Halladay, over those last four seasons.

Just ahead of him, with a 2.87 FIP, is his potential new teammate, Clayton Kershaw.

Greinke and Kershaw have nearly identical numbers since 2009, as noted in the chart above right, with Kershaw just a hair better in just about every stat.

Greinke wins by keeping the ball down. Over the last two seasons, he’s thrown 55 percent of his pitches in the lower-third of the strike zone or below.That ranks fourth-highest among those who have faced at least 1,000 hitters in that span, trailing Derek Lowe, Jake Westbrook and Jason Marquis.

He also keeps the ball away from opposing hitters, not letting them get pitches that they can drive. The last two seasons, he threw 58 percent of his pitches over the outer-third of the plate, or off the outside corner. That rates 10th-highest in the majors.

The one edge that Greinke can claim over Kershaw is that he had the better Cy Young season. In fact, Greinke's 10.1 Wins Above Replacement in 2009 rank highest for any season by a pitcher in the last 10 years.