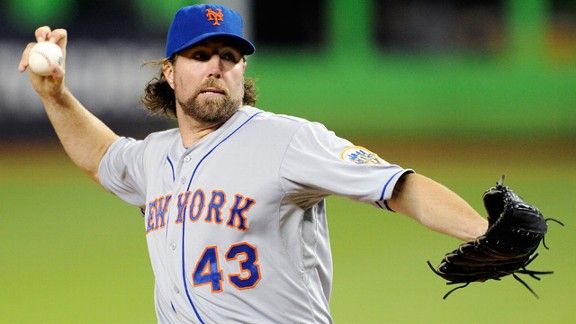 It appears that R.A. Dickey is headed to Toronto.According to a report, R.A. Dickey will be traded from the New York Mets to the Toronto Blue Jays if he agrees to a contract extension.

Why would Dickey be such a valuable addition to an already stellar Blue Jays rotation?

Dickey became the first knuckleball pitcher to win the Cy Young last season. At age 37, he was the third-oldest to win the award in major-league history. He was also the third Met to win it, joining Tom Seaver and Dwight Gooden.

Dickey ranked in the top three in the National League in virtually every major statistical category, leading the league in shutouts and complete games.

He was the Mets' first 20-game winner since Frank Viola in 1990 and the third NL pitcher in the last 30 seasons to win 20 games for a losing team, joining Fernando Valenzuela (1986 Los Angeles Dodgers) and Greg Maddux (1992 Chicago Cubs).

Dickey had one of the most dominant stretches for a pitcher in recent memory. Over an eight-start stretch in May and June, he was 7-0 with an 0.86 ERA and .139 opponent batting average. In those eight starts, he allowed seven runs, five of them coming in one start against the Yankees.

Dickey did not completely come out of nowhere. He was good in 2010 and 2011, though not at this level. He ranks 11th among pitchers in Wins Above Replacement over the last three seasons combined.

What makes Dickey so good?

Dickey’s big jump in performance came as his knuckleball was thrown harder and became harder to hit. He became more reliant on the hard knuckleball this season, one he could throw upwards of 80 miles per hour.

Dickey got hitters to miss on nearly one-third of their swings against knuckleballs thrown that fast, up significantly from the previous two seasons.

Another thing that Dickey does well is field his position. That includes both fielding balls (he led the majors in assists by a pitcher in 2011) and holding baserunners (who went just 4-for-7 in steal attempts against him last season).

In obtaining Dickey and lefty Mark Buehrle this offseason, the Blue Jays have added two of the top fielding pitchers in MLB.

Buehrle ranked tied with Jake Westbrook for the most Defensive Runs Saved in the majors over the last 3 seasons with 31. Dickey ranked third, one spot ahead of teammate Ricky Romero.

What appealed to the Blue Jays

A nice bonus for the Blue Jays is how well Dickey has pitched previously against AL East opponents. In three seasons with the Mets, Dickey made six starts against the Blue Jays AL East rivals. He was 4-0 with a 1.71 ERA in those six games, which included consecutive one-hitters against the Tampa Bay Rays and Baltimore Orioles.

Stat of the Trade