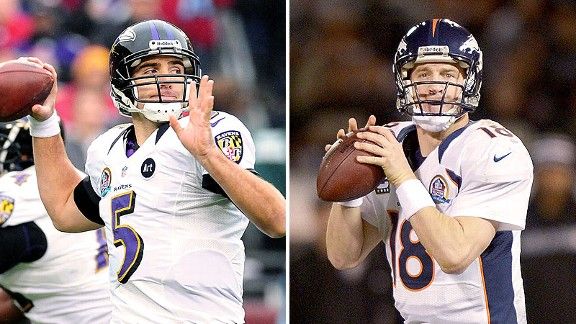 Joe Flacco (left) leads the Ravens against Peyton Manning (right) and the Broncos.The Divisional round gets underway on Saturday at 4:30 ET when the Denver Broncos, the top seed in the AFC, host the Baltimore Ravens, who got past the Indianapolis Colts in the Wild Card round.

Here are eight notes, nuggets and numbers you need to know heading into the matchup:

According to the Elias Sports Bureau, all four remaining AFC teams reached the Divisional round last season, the first time ever the same teams were the “Final Four” in a conference in back-to-back seasons.

Flacco is 4-4 on the road in eight playoff starts. Eli Manning (five) is the only starting quarterback with more road wins in the postseason.

Bernard Pierce ran for 103 yards last week, the second Ravens rookie with 100 rushing yards in a playoff game. Jamal Lewis did it twice in the 2000 playoffs, the year the Ravens won their only Super Bowl title.

Peyton Manning is making his 12th postseason appearance, tied with Brett Favre for the most in NFL history by a starting quarterback.

Manning has won nine straight starts against the Ravens, including the playoffs. That’s the second-longest active winning streak by a quarterback over a particular opponent. Coincidentally, Flacco has won 10 straight against the Cleveland Browns, the only active streak longer than Manning’s over the Ravens.

The Broncos have won 11 straight games, the longest active win streak in the NFL and their longest since opening the 1998 season 13-0. They won the Super Bowl that season.

The Broncos are 13-3 all-time at home in the playoffs, which is tied for the second-best home playoff record (minimum of five games).