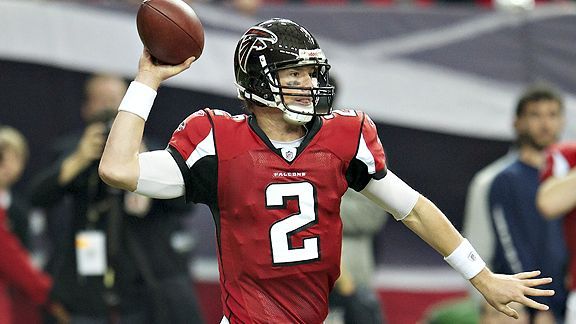 Matt Ryan is 0-3 in his playoff career and is looking to avoid becoming the first quarterback since the merger to lose his first four postseason starts.

Ryan has never thrown for 200 yards in a playoff game, and his 28.3 Total QBR in the postseason is second-worst among quarterbacks with at least two playoff starts since 2008 (Andy Dalton, 16.6 Total QBR).

Despite his struggles, Ryan has made big strides this past season that could indicate he’s ready for his first playoff win. Below are four factors that show how Ryan has improved:

The Atlanta Falcons were 7-2 in games decided by eight points or fewer this season and Ryan’s clutch play late in games was a big reason why.

Matt Ryan in Final 2 Minutes of Half
Career (Inc. Playoffs)

In Week 4 against the Panthers, Ryan led the Falcons on a 77-yard game-winning drive with under a minute to play.

Ryan had struggled in two-minute drill situations in years past. Entering 2012, Ryan had 11 interceptions and had never completed more than 51 percent of his passes in a season in the final two minutes of either half.

In the same situations this season, Ryan had the second-best completion percentage (69 percent) and the most attempts (65) without an interception.

Entering this season, Ryan was a league-average passer when throwing more than 10 yards beyond the line of scrimmage. From 2008 to 2011, Ryan completed 47 percent of those attempts (37 percent in the postseason) and cracked 50 percent in just one season, his rookie year of 2008.

This season Ryan has found his touch, completing 56 percent of his attempts more than 10 yards downfield, fourth-best in the NFL.

One big addition to the Falcons offense this season has been the screen pass.

Ryan has attempted 67 screen passes this season, second-most in the NFL. In 2010 and 2011, Ryan attempted 36 total screens, none in the postseason.

Not only have the Falcons been attempting more screens, they have also gotten a lot out of them.

The Falcons have averaged 7.2 yards per screen pass this season (seventh) and have the most touchdowns on such plays.

Although Roddy White, Julio Jones and Tony Gonzalez all played for the Falcons last season, the trio has become even more important for Ryan this season.

The Falcons were one of three teams this season to have a trio of receivers finish with 100-plus targets (White 138, Jones 126, Gonzalez 123).