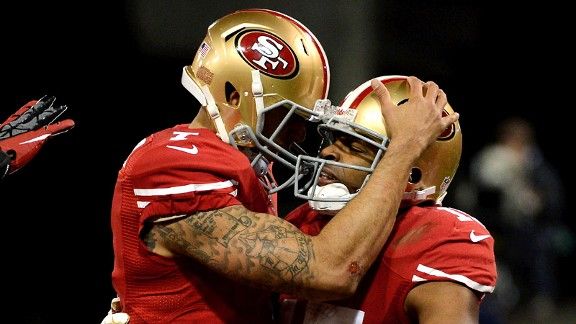 No one has benefitted more from Colin Kaepernick taking shots downfield than Michael Crabtree.

By many accounts, Alex Smith had a pretty good year.

Smith was the only qualified quarterback in the league to complete more than 70 percent of his passes this season, throwing 13 touchdowns and five interceptions in his nine games as a starting quarterback. Smith’s 70.1 Total QBR was the sixth-best mark in the league, ranking higher than 27 of the league’s most current 32 starters.

So why will Smith be watching the NFC Championship from the sideline? One of those five starters ahead of Smith is teammate Colin Kaepernick, whose 81.5 Total QBR is the second-best in the league.

Kaepernick’s impact on San Francisco’s rushing game has been well documented, with zone-read option rushes added to the 49ers’ playbook since Kaepernick took over. As a pure passer he still presents an upgrade over his predecessor.

At first glance Kaepernick and Smith have similar passing numbers -- they both completed 153 passes and posted TD-Int differentials of +8.

However, Kaepernick has completed the same amount of passes as Smith in one fewer start despite an average pass length of 9.7 yards downfield, the fourth-highest average in the league. Smith’s 7.4 average throw distance ranks sixth-lowest among qualified quarterbacks.

49ers QBs On Throws 20+ Yards Downfield
This Season Including Playoffs

Kaepernick has also connected on 15 plays of at least 30 yards this season, more than twice as many as Smith (six).

His willingness to stretch the field has made the 49ers a more dangerous and balanced offense. He's averaged more than twice as many throws more than 20 yards downfield as Smith did, but has protected the ball well. Kaepernick and Smith each have one interception on deep throws this season.

In his first nine games this season with Smith as starter, Crabtree tied for 41st in the league with 59 targets, was 39th with 510 receiving yards, and his average target depth was 6.4 yards downfield, the third-lowest of 76 qualified wide receivers.

Since Kaepernick became the starter in Week 11, Crabtree is fifth in catches (50), fourth in receiving yards (714) and tied for second with seven touchdowns.

One other difference between Kaepernick and Smith is highlighted when the play breaks down. Smith took a sack every 10.6 dropbacks, the worst mark in the league. Kaepernick is sacked every 17.4 dropbacks, which is 13th among 36 qualified quarterbacks.

Instead of taking sacks, Kaepernick extended plays with his legs. Kaepernick’s Total QBR under duress or when being hit while throwing this season was 53.3, fifth-best in the league, and an improvement on Smith’s 15.7 mark.