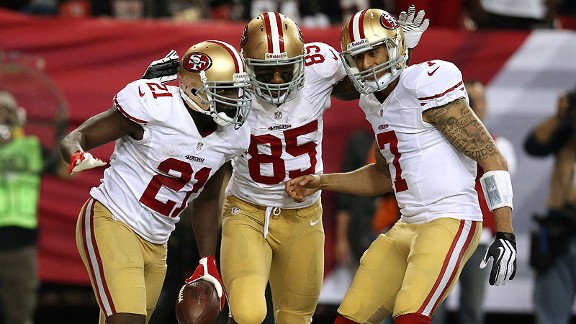 Colin Kaepernick (right) and Vernon Davis (middle) gave the Falcons fits for most of the game.For the second straight week, the Atlanta Falcons let a big lead at home get away from them.

Only this time they were not able to come from behind and win.

According to the Elias Sports Bureau, the San Francisco 49ers' 17-point comeback (they trailed 17-0) is the third largest road comeback in postseason history. The record is owned by the 1957 Detroit Lions, who came back from a 20-point deficit at San Francisco. It was the second largest deficit overcome to win a conference championship game. That record is held by the 2006 Indianapolis Colts, who overcame an 18-point deficit against the New England Patriots.

The 49ers' win snapped their five-game playoff road losing streak, winning on the road for the first time since beating the Bears in Chicago in the 1988 NFC Championship Game.

Davis was targeted six times on Sunday, this after being targeted an average of three times per game in Kaepernick's first eight starts.

Atlanta struggled defending tight ends this postseason. During the regular season, only one tight end (Jimmy Graham) had 100 yards receiving against the Falcons. This postseason, they allowed two such games. (Seattle's Zach Miller had 142 yards in the divisional round.)

Matt Ryan threw for 271 yards and three touchdowns in the first half. However, after halftime he had 125 yards passing and turned it over twice with an interception and a fumble. Ryan's 396 yards passing are a franchise record in a playoff game, breaking the previous record of 366 set by Jeff George in 1995.

Also according to Elias, the Falcons are the first home "dome" team to lose the conference championship game since the 1998 Minnesota Vikings, who lost to the Falcons.

The Falcons also are the first No. 1 seed from the NFC to lose in the conference championship game since the 2003 Philadelphia Eagles.

San Francisco will be going to its sixth Super Bowl, and its first since the 1994 season.