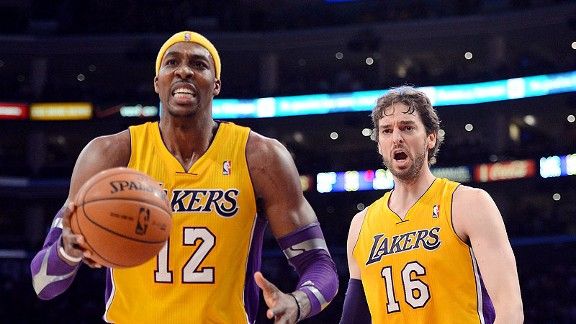 The Lakers find themselves at 17-24. Their use of Dwight Howard and Pau Gasol is part of the problem.

Halfway through the season, the Los Angeles Lakers find themselves at 17-24, and history is not on their side.

Over the last 25 seasons (entering the 2012-13 season), 107 Western Conference teams have started 17-24 or worse. Just four of those teams went on to make the playoffs and none won a playoff series.

In fact, the last time a Western Conference team started 17-24 or worse and won a playoff series came all the way back in 1980-81 when the Kansas City Kings won their first two playoff series against Portland and Phoenix before losing to Houston in five games in the Conference Finals.

What can the Lakers do to solve their problems?

Lakers Under Mike D’Antoni
By Pace This Season

Pace measures possessions per 48 minutes. The Lakers are averaging a pace of 97.70 under D’Antoni, the second highest pace in the league dating back to when D’Antoni took over.

Los Angeles played at a much slower pace last season, ranking 20th in that category with 92.93 possessions per 48 minutes, and have been more successful playing at a slower pace this season as well.

The Lakers are fifth in the league in points per game, but the offense looks much different than it did a season ago.

In particular, the Lakers have largely ignored the post, running fewer plays in the post and thus generating fewer points there as well.

Speaking of the post, the combination of Dwight Howard and Pau Gasol has so far been a puzzle for the Lakers.

According to the Elias Sports Bureau, the team's worst lineup has been one that includes both big men at the same time.

With both Howard and Gasol on the floor together, the Lakers average 99.0 points per 48 minutes.

By contrast, they average 100.6 points with Howard alone, and 102.2 points with Gasol alone.

The pressure is on the Lakers, as they're four games behind the final playoff spot at the midway point in the season.