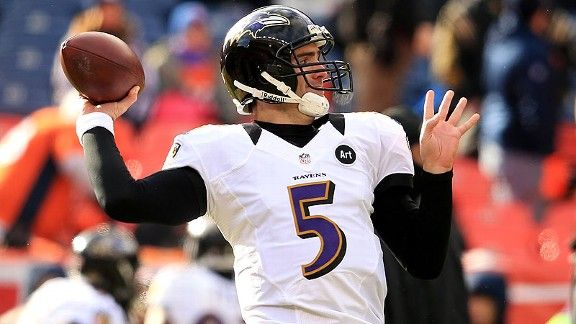 Joe Flacco has improved this season after the Ravens made a change.Joe Flacco has been a much different quarterback in the postseason, posting a Total QBR of at least 65.0 in all three playoff games -- something he did just six times during the regular season. His playoff QBR of 77.5 is a huge improvement over the 46.8 he put up in the regular season.

What’s been the difference?

The contrast has been even greater on first down -- Baltimore has used designed rushes on 61 percent of their first-down plays under Caldwell, compared to less than 50 percent under Cameron.

Under Caldwell, Flacco is averaging 9.1 yards per attempt and has thrown eight touchdowns without an interception against a standard pass rush (four or fewer rushers). That’s nearly two more yards per attempt than under Cameron, when he had 13 touchdowns and seven picks.

Flacco is sixth in the league with an 83.7 Total QBR against a standard pass rush over his past six games. He posted a 60.8 QBR in those situations during the first 13 games of the season, 20th in the NFL.

Flacco On Throws 21+ Yards Downfield This Season by Offensive Coordinator

This has opened up a new dimension in the passing attack -- the deep ball. Under Cameron, Flacco completed just over a third of his passes more than 20 yards downfield. That number is above 50 percent under Caldwell.

His average target depth has been 12.4 yards downfield in the postseason -- nearly three yards longer than his regular season average -- and his two games with his longest average pass depth have come in the past two weeks.

Flacco averaged the same number of attempts deeper than 20 yards downfield under both coordinators (5.6 per game) but he’s capitalized on those throws under Caldwell+.

He has the most such pass attempts this season (101) but has yet to throw an interception on those throws. Since the start of 2008, no quarterback has finished a season with more than 58 such attempts without an interception (Brett Favre, 2009).

The Ravens have used the offensive line combination of Bryant McKinnie (LT), Kelechi Osemele (LG), Matt Birk (C), Marshall Yanda (RG) and Michael Oher (RT) on every snap in the postseason after not using that particular unit on one snap in the regular season.