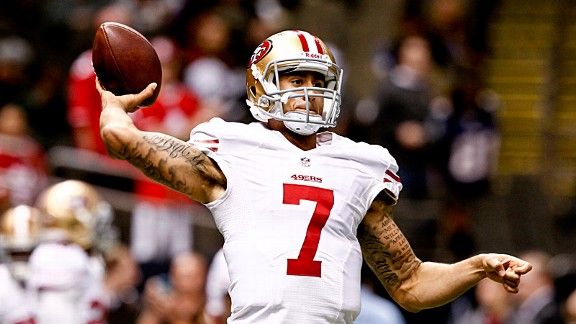 Colin Kaepernick has been among the most accurate passers in the NFL this season.

Colin Kaepernick has made just nine career starts, including the playoffs, but he’s got the San Francisco 49ers in the Super Bowl thanks to his performance from all areas of the field.

What makes Kaepernick so good? Let's take a look at three aspects of his game.

Only 12.5 percent of his pass attempts have been incomplete due to an over- or underthrown pass this season, the lowest in the league (including playoffs).

When he’s off-target, the result is almost always an overthrow. Only four of Kaepernick’s 101 incompletions (including playoffs) have been the result of an underthrown pass.

He’s the most accurate passer in the league on throws more than 20 yards downfield and has completed at least one of those throws in all but one of his starts this season.

Kaepernick hasn’t been breaking the pocket as often in the postseason, with 94 percent of his pass attempts coming from within the pocket.

In the regular season, 79 percent of his attempts came in the pocket, the second-lowest rate in the league (Russell Wilson).

Despite not starting until Week 11, Kaepernick has been one of the most prolific rushing quarterbacks this season.

In the regular season, when facing added pass pressure (five or more pass rushers), he held onto the ball for 3.8 seconds before passing, taking a sack or scrambling (league average: 3.4 seconds).

That rate has dipped to just 2.8 seconds in the postseason, and the result has been a Total QBR of 98.9 and a completion percentage near 70 percent against such pressure.

Kaepernick set an NFL record in his first postseason start when he ran for 181 yards, the most by a quarterback in any game, regular season or postseason.

Colin Kaepernick Rushing by Play Type This Season (Including Playoffs)

The 49ers have used more option plays in two postseason games than they did in Kaepnerick’s seven regular season starts.

He didn’t keep the ball on a single option play in the NFC Championship, but the 49ers still scored three touchdowns on those plays.

And he’s managed to avoid the big hit in the playoffs. Excluding kneel downs, Kaepernick has taken contact on five of his 16 rushes this postseason (31 percent).

In the regular season, Kaepernick took contact on 55 percent of his rushes.