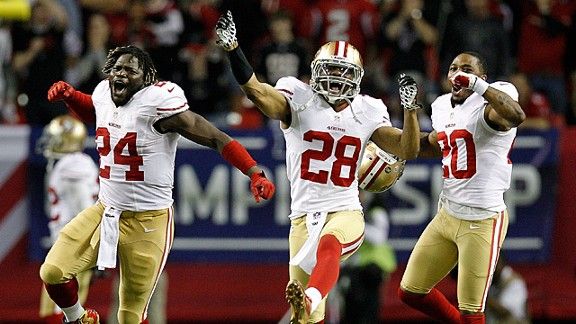 The 49ers' defense has had a lot to celebrate this season.Earlier Wednesday we shared some of the top stats to know about the Baltimore Ravens' defense. In the interests of equal opportunity, let's do the same for the San Francisco 49ers'.

The 49ers' defense has ranked among the best in the NFL over the past two seasons. But what else should you know about it?

The 49ers have stayed together

The 49ers have had nine players play at least 90 percent of their defensive snaps this season. No other team had more than six.

All four members of the 49ers' secondary (Carlos Rogers, Donte Whitner, Dashon Goldson and Tarell Brown) have played between 97 to 98 percent of their snaps this season.

The 49ers allowed only 26.4 yards per opponents drive in the regular season, the sixth-best performance in the NFL.

The 49ers are a team that finishes hits.

San Francisco has allowed 112 yards after contact in its 2 playoff games (56.0 per game).

The 49ers allow an average of 1.2 yards after contact per rush, the best rate in the NFL.

Aldon Smith has 35.5 sacks in his first two seasons, but none this postseason.

Despite his recent sack drought, his 33.5 regular-season sacks through two seasons are the most by any player since the NFL started tracking sacks in 1982.

Aldon has recorded 34.5 of his 35.5 career sacks with Justin Smith on field. In the 141 dropbacks that Aldon Smith has seen without Justin Smith, he has only one sack.

The 49ers are reasonably well-equipped to handle Joe Flacco.

They have allowed only three touchdown passes against them this season on throws that traveled at least 21 yards in the air, tied for the second-fewest in the NFL.

Opponents are 21-for-72 on throws of that length against the 49ers this season. The 29 percent opponnents’ completion percentage ranked 11th-best in the NFL.

The 49ers' defense has allowed multiple completions on passes thrown more than 20 yards downfield in three straight games, with opponents going 7-of-13 on those throws, including Matt Ryan's first-quarter touchdown to Julio Jones in the NFC championship.

The 49ers didn’t allow multiple completions in back-to-back games the first 15 games of the season.

The 49ers finished second in the league in scoring defense in 2012, allowing 17.1 points per game. That is 10 spots better than the Ravens' defense.

Every one since the 1990 New York Giants has won.

The two for which defense played the biggest role were the 2000 Ravens (who did not allow an offensive touchdown against the Giants) and the 2002 Tampa Bay Buccaneers (who had five interceptions in their win over the Oakland Raiders).