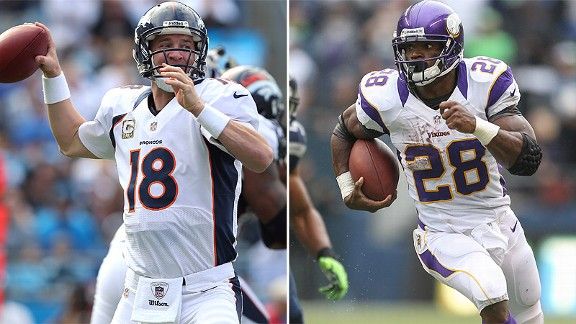 Peyton Manning and Adrian Peterson had seasons that were were statistically memorable.On Saturday, the NFL will honor the top players of the 2012 season with a two-hour ceremony to crown its award winners. Let’s look at the key storylines for the most notable awards.

Denver Broncos quarterback Peyton Manning, the all-time leader in most AP NFL MVP awards, has a great chance to win his fifth.

After missing all of 2011 with a neck injury, Manning led the NFL with an 84.1 Total QBR in 2012, seven points better than Tom Brady, who finished second.

Since 2008 every player that finished the regular season with the highest Total QBR went on to win the MVP award.

The biggest improvement that Manning made to his game was his ability to connect on passes more than 20 yards downfield. His completion rate in 2008, 2009, and 2010 never exceeded 36 percent, but his 2012 rate of 46 percent trailed only Robert Griffin III for best in the NFL.

The one player who could deny Manning’s bid to be the third Broncos player to win (along with John Elway and Terrell Davis) is Minnesota Vikings running back Adrian Peterson.

Peterson rushed for 2,097 yards, second-best in a single season in NFL history. He was the first rushing leader to average at least six yards per carry since Barry Sanders in 1997.

Defensive Player of the Year: Watt more could you ask for

The award is Houston Texans defensive lineman J.J. Watt’s to lose. Watt had 36 ½ disrupted dropbacks (a number that combines sacks, passes defended, batted balls and interceptions). No other player had more than 23 this season. No one else has had more than 26 in a single season over the last three seasons.

Statistically speaking, Watt has the best numbers of any defensive linemen.

Among non-linemen, the player with the best stat-based case is Bears defensive back Charles Tillman.

Tillman led the NFL with 10 forced fumbles and tied for the lead in interceptions returned for touchdowns with three.

Tillman was the only player in the NFL this season with at least three interceptions, 10 passes defended, and five forced fumbles.

The Bears yielded 4.8 yards per play and allowed a touchdown every 47 plays in the 896 plays in which Tillman was on the field.

They allowed 5.9 yards per play and one touchdown every 24.6 plays in the 123 plays in which he was off the field.

Offensive Rookie of the Year: The Year of the QB

But if Andrew Luck, Robert Griffin III or Russell Wilson wins, they would be the sixth quarterback to do so since 2004. With all due respect to Alfred Morris and Doug Martin, they are the most likely winners of this award.

The "Other" Rookie of the Year
Top Defensive candidates

What stat makes the best argument for each of the three?

In Luck’s case, it’s his ability to come up clutch. He had seven game-winning drives in the fourth quarter or overtime this season, tied for the most by any player in a single season since the AFL-NFL merger in 1970.

He particularly excelled when teams sent heavy pass-pressure. His 96.8 Total QBR against five or more pass rushers was the best by any quarterback in the last five seasons.

Wilson set an NFL record for touchdown throws by a rookie (26). His plus-16 touchdown-interception differential was the best by a rookie in NFL history.

Wilson was terrific in the Seahawks late-season surge. His 84.1 Total QBR from Week 10 through season’s end was best in the NFL.