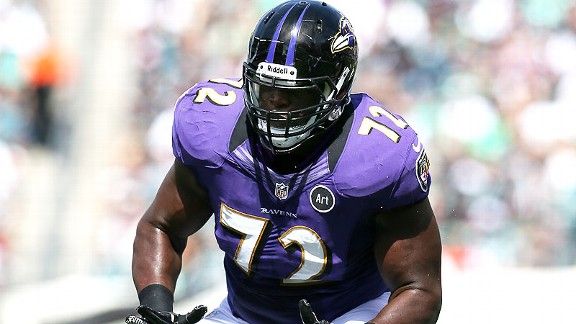 That unit has played every snap this postseason, and is a big reason why Joe Flacco and the rest of the Ravens offense have flourished in their last three postseason games.

Flacco boasts a 77.5 Total QBR this postseason, third best among playoff quarterbacks. With all other line combinations this regular season, Flacco posted a 46.8 QBR, ranked 25th among 36 qualified quarterbacks.

Flacco has been sacked less and had more time to throw in the playoffs. And a couple tenths of a second can make a big difference.

Flacco has been sacked once every 24.8 dropbacks so far this postseason compared to once every 16.3 dropbacks with all other line combinations in the regular season.

Flacco had an average of 2.58 seconds in the pocket in the regular season, which ranked 26th in the league.

With this current line, Flacco averaged 2.76 seconds of time in the pocket, which would have been tied for ninth-best among qualified quarterbacks during the regular season.

Flacco has taken advantage of the extra time by airing the ball out more. His average pass has traveled 12.4 yards downfield in the postseason, nearly 3 yards more than his regular season average.

The extra time has been key for Flacco, case in point being the 59-yard touchdown pass to Torrey Smith that accounted for Baltimore's first score in Denver.

Flacco has completed half of his passes (10-for-20) deeper than 20 yards downfield in the postseason, a marked improvement from his 37 percent completion percentage (30-for-81) on those throws in the regular season.

Baltimore’s improved offensive line will contend with a 49ers’ pass rush that has not been the same since Justin Smith injured his triceps in Week 15.

The 49ers sacked the quarterback once every 13.2 dropbacks with four or fewer pass rushers in their first 14 games, the second-highest rate in the league. Since Justin Smith’s injury, their standard pressure has gotten a sack once every 25.1 dropbacks.

Yanda and Oher have also opened things up for the Ravens ground game when it has chosen to run to the right side.

Baltimore running backs are averaging 6.9 yards per run to the right side, better than every team in this year's playoffs except for the Cincinnati Bengals (who had 34 yards on four right-side runs).

Ravens running backs averaged a little under five yards per right-side run during the regular season.

Ray Rice and Bernard Pierce have combined for two right-side runs of 20 or more yards this postseason, matching the total that Ravens rushers had in the regular season.

Pierce has nine right-side rushes for 93 yards in the three playoff games, including a 43-yard fourth-quarter run against the Indianapolis Colts that helped the Ravens extend what was a one-score lead at the time.

It's one of many plays this postseason in which the new-look offensive line has made quite the right kind of impact.