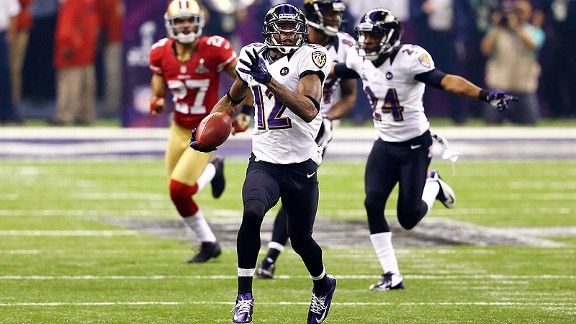 Jacoby Jones going long distances for touchdowns was a theme throughout this season.The Baltimore Ravens have the best postseason record in NFL history.

They earned their way to that mark by proving they were the best team this postseason, beating the San Francisco 49ers, 34-31 in Super Bowl XLVII.

Let’s run through some of the statistical highlights of a contest that will be well remembered for many things that go beyond the numbers.

The Ravens became the fifth team to win their first two Super Bowl appearances, joining the 49ers, Pittsburgh Steelers, Green Bay Packers and New York Giants. They snapped a four-game win streak by the NFC in Super Bowls, becoming the first AFC team to win one since the 2008 Steelers.

The win was Joe Flacco’s ninth in postseason, matching Tom Brady for the most playoff wins by a quarterback in his first five seasons. Flacco joins Eli Manning as the only quarterbacks in postseason history to win seven games on the road or at neutral sites

Ravens coach John Harbaugh improved to 7-0 as a head coach following a bye week. The Ravens 63 wins since Harbaugh took over at the start of the 2008 season are tied with the New England Patriots for the most in the NFL in that span.

The 49ers outgained the Ravens 448 to 347 in combined rushing and passing yardage. Baltimore allowed the most yards in a Super Bowl for any winning team and became the third team to win a Super Bowl despite being outgained by at least that much, joining the 2001 Patriots and 2008 Pittsburgh Steelers.

Flacco had three touchdown passes, giving him 11 with no interceptions this postseason.

He’s the second quarterback with 11 touchdowns and no interceptions in a postseason, joining Hall of Famer Joe Montana for the 1989 49ers.

Flacco saved his most accurate game for last, completing 67 percent of his throws.

He was 7-of-13 for 171 yards and two touchdowns on passes more than 10 yards downfield on Sunday.

Flacco struggled on those throws in the regular season, posting the second-worst completion percentage (41 percent) but found his touch in the this postseason, much more than any of the four previous times he'd been to the playoffs.

Flacco caught the 49ers at the right time.

In the regular season, the 49ers allowed only three touchdowns (fewest in the NFL) on that length of throw throws and a 38.7 completion percentage (third-best).

Including the Super Bowl, the 49ers allowed five touchdowns and a 67.5 completion percentage on passes more than 10 yards downfield in the postseason.

Flacco finished with a Total QBR of 95.1, tied for his second-best in a game in his career. It was nearly 50 points better than his QBR during the regular season (46.8).

Play of the game: Jacoby Jones goes the distance

Jacoby Jones set the record for the longest kick return in Super Bowl history with his 108-yard touchdown to open the second half.

This was Jones’ third kickoff return of at least 105 yards for a touchdown this season. The only other player with multiple 105-yard touchdowns in his career is his teammate, Ed Reed, who has two.

This was the second kickoff return for a touchdown in the Superdome. Desmond Howard had the other for the 1996 Green Bay Packers, a 99-yarder against the New England Patriots in Super Bowl XXXI that stood as the record for the longest Super Bowl kickoff-return touchdown until Jones’ score.

Jones is the second player in NFL postseason history with a kickoff return touchdown and receiving touchdown in the same game, joining Dante Hall who did it for the Kansas City Chiefs in the 2003 AFC Divisional Playoffs.

It was the second 100-yard touchdown in Super Bowl history, joining the 100-yard interception return for a touchdown by James Harrison for the 2008 Pittsburgh Steelers against the Arizona Cardinals in Super Bowl XLIII.

The 49ers 31 points tied the most by a losing team in a Super Bowl, matching the total scored by the Dallas Cowboys against the Pittsburgh Steelers in Super Bowl XIII.

It is the most points the 49ers have ever scored in a postseason loss. They were 13-0 in postseason play when scoring at least 31 points prior to today.

The 49ers outscored the Ravens 25-6 and outgained them 260-126 after the third-quarter power outage, but that would not be enough.

Colin Kaepernick also just missed out on Steve McNair's Super Bowl record for rushing yards by a quarterback. He finished with 62, two shy of the mark.

The one issue for Kaepernick on a day in which he threw for more than 300 yards was that he couldn't finish off enough drives needed to complete the comeback.

Kaepernick was 0-for-4 on passes thrown into the end zone in the game and 1-for-8 on such throws in the postseason. Six of the seven incompletions were the result of overthrown passes.