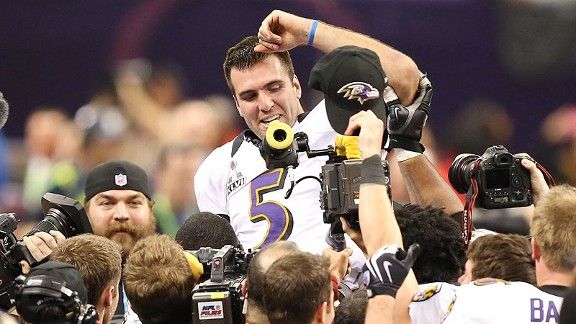 Joe Flacco's exceptional playoff run is a significant reason why the Baltimore Ravens are Super Bowl XLVII champions, but where specifically did he excel? An advanced look into his performance as well as some others from both the Ravens and San Francisco 49ers:

For starters, Flacco was able to find success downfield. He was 7-13 for 171 yards and two touchdowns on passes deeper than 10 yards downfield in Super Bowl XVLII. By contrast, Flacco struggled on those throws in the regular season, posting the second-worst completion percentage (41.1 percent).

From 2008-11 in the postseason, Flacco had just one touchdown and six interceptions on throws over 10 yards downfield, but this postseason, he tossed seven touchdowns and had no interceptions. On Sunday, Flacco also took advantage of a San Francisco defense that had been allowing the big play more often.

Bold When it Matters

Flacco completed seven-of-10 third-down throws for 158 yards and two touchdowns, including four-of-four and a touchdown targeting Anquan Boldin. Boldin entered the game with just one third-down touchdown reception in 105 career third-down targets with the Ravens.

Boldin also became more of a threat near the goal line in the playoffs. He caught four-of-four passes thrown into the end zone during the postseason, including a 13-yard touchdown reception to open the scoring. Compare that to the regular season, when he caught three of 10 end-zone targets.

Teammate Jacoby Jones was also a significant threat. Jones scored on a 56-yard reception with 1:45 left in the second quarter, giving the Ravens a 21-3 lead. The pass traveled 47 yards downfield, giving him two touchdowns this postseason on throws at least 40 yards downfield. He is the first player since Larry Fitzgerald in 2008 to score two touchdowns on such passes in a single postseason.

On the San Francisco side, Colin Kaepernick's strengths often became weaknesses. Including postseason play, Kaepernick entered Sunday leading the NFL with an on-target throw percentage of 87.5 among quarterbacks with at least 20 pass attempts. Against the Ravens, Kaepernick under or overthrew seven of 28 attempts (25.0 percent) including the only interception by either quarterback on a pass that sailed well over the head of Randy Moss.

What's more, the 49ers ran 13 option plays in both the Super Bowl and NFC Championship, but Kaepernick kept only once on those plays. In his first eight starts, Kaepernick kept a third of the time, including seven rushes for 99 yards in the Divisional Playoffs.