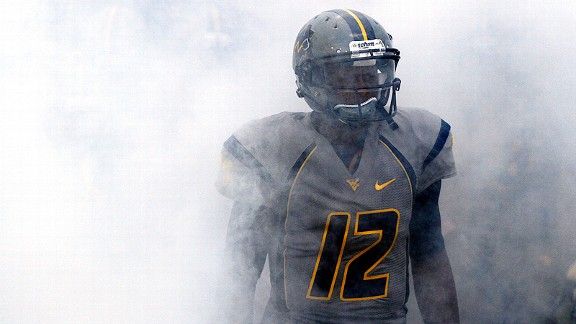 When the smoke clears, what will become of Geno Smith?

Jon Gruden will be doing his Quarterback Camp with Geno Smith at 8:30 p.m. ET tonight on ESPN2.

To give you something to think about as you watch, here is an in-depth breakdown of Smith’s greatest strengths and some team-specific concerns about him from a statistical perspective.

Smith completed 71.2 percent of his passes last season, including 42 touchdowns. Smith threw just six interceptions in 518 pass attempts and did not throw an interception in his first 272 pass attempts of the season.

Smith was particularly effective on short passes. He attempted half of his passes within five yards of the line of scrimmage, including an AQ-high 112 screen passes last season.

On passes of this distance, Smith completed 82.6 percent with 15 touchdowns and no interceptions.

In comparison to recent top QBs, Smith completed a similar percentage of his passes in his final year of college, but it is important to note that his average pass traveled more than a yard shorter than all of those quarterbacks listed in the chart above.

Poise in the Pocket

Smith was able to exploit blitzing defenses in much the same way that Robert Griffin III did in his final season of college. Griffin III went on to lead the NFL with a 96.8 Total QBR against the blitz.

Further, Smith was sacked 19 times in 571 dropbacks last season. He was able to scramble for 253 yards when forced out of the pocket as well as complete 49.5 percent of his passes when under duress (avg FBS quarterback completed only 40 percent).

West Virginia gained 2,459 yards after the catch last season, most of any school in an AQ conference. While the Mountaineers had one of the best receiving duos in the nation in Tavon Austin and Stedman Bailey, a lot of their success was due to Smith’s ball placement.

To put that into perspective, Baylor averaged 6.3 yards after the catch per reception while running a similar offense with Griffin at quarterback.

Smith attempted over 96 percent of his passes out of a shotgun or pistol formation in his career.

The NFL is trending towards more spread tendencies, but the average NFL quarterback still attempted over a third of his passes after taking a snap from under center.

Teams looking for the next zone-read quarterback may be lured by Smith’s 4.59 40-yard dash at the combine. Yet, Smith attempted only 11 designed rushes in 2012 and averaged 2.5 yards per rush on those carries.

Smith is adept at taking snaps and passing from a pistol formation – the primary formation used for zone reads – but has not shown the ability to run out of the formation.

Since West Virginia coach Dana Holgorsen introduced Smith to the pistol in 2011, Smith has thrown 42 touchdowns and four interceptions out of that formation. He improved his completion rate from 63 percent in 2011 to nearly 72 percent last season.

Note that just because Smith did not run does not mean that he cannot run. Smith scrambled for 253 yards and averaged 7.2 yards per scramble in 2012.

Smith’s final college game came in snowy Yankee Stadium in the New Era Pinstripe Bowl. The lasting image for many will be Smith struggling in that game with one fumble lost and two plays resulting in safeties.

Over the last two seasons, Smith has fared worse in cold weather than in mild weather.