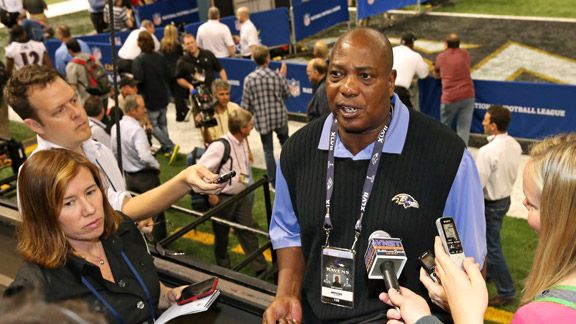 Ravens GM Ozzie Newsome has a lot of decisions to make in this draft.

The Super Bowl champion Baltimore Ravens have 12 picks in the NFL Draft. Based on what they lost in free agency, the Ravens may need every one.

Baltimore’s defense has lost six of 11 Super Bowl starters, in addition to pass-rushing specialist Paul Kruger (who did not start the game). Three of the four starting defensive backs are gone, as are three members of the front seven.

Though Joe Flacco returned, the offense will have to replace a pair of reliable veterans.

Here’s a closer look at the numbers behind Baltimore's departures:

Still, Ray Lewis and Reed were the only two players on the Ravens defense to play all 333 postseason snaps (including penalties) during Baltimore’s Super Bowl run.

-- New Tennessee Titans’ safety Bernard Pollard (played 94 percent of snaps last season) and Sean Considine also left in free agency, leaving one player on the roster who took a snap at safety for Baltimore last year (James Ihedigbo). Michael Huff was signed from Oakland, but there’s still a sizeable hole at the back of the Baltimore defense. Scouts Inc.’s Todd McShay has the Ravens addressing this by taking Eric Reid from LSU with their first-round pick.

-- Ray Lewis’ replacement may improve the Ravens pass defense right away. Opponents’ yards per pass attempt rose from 5.9 in 2008 to 7.7 last season with Lewis on the field.

-- From Week 10 to the Super Bowl, no one had more sacks than new Cleveland Browns’ pass rusher Paul Kruger (12). Kruger, who posted as many sacks as Mario Williams and Jared Allen combined, had 4.5 sacks during Baltimore’s playoff run.

-- Anquan Boldin, who was traded to the San Francico 49ers, led the Ravens with 43 targets on third down this season (including playoffs), and ranked seventh among all wide receivers with 29 catches on third down.

Boldin was excellent during Baltimore’s postseason run, and had 6 receptions for 104 yards and a touchdown in the Super Bowl.

-- Center Matt Birk, who made 187 regular-season starts in his 15-year career, retired in the offseason. Birk was a constant presence on the Ravens’ offensive line. From Week 1 of 2008 to Super Bowl XLVII, the only player in the league with more offensive snaps than Birk was his quarterback, Joe Flacco.