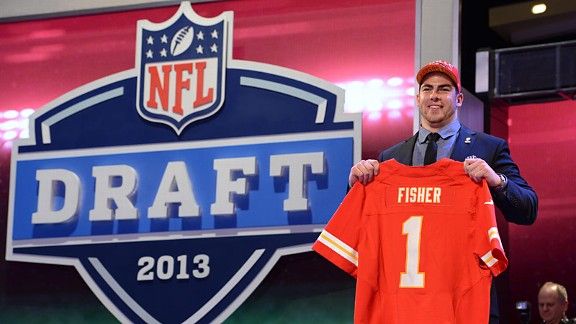 Fisher is also the first player from the MAC to be selected first overall. The previous highest MAC player selected was Byron Leftwich, who was the seventh pick in 2003.

With Luke Joeckel going second, this is just the second time that offensive linemen have been taken first and second overall in the draft. The other time it happened was in 1968, when Yary was taken first and center Bob Johnson was taken second.

And when Kyle Long went to the Chicago Bears at No. 20, that made it eight offensive lineman taken in the first 20 picks for the first time in NFL Draft history.

Where are the skill players?

Wide receiver Tavon Austin was the first skill player taken with the eighth pick overall by the St. Louis Rams. This is the latest that the first QB/RB/WR has gone off the board since 1991 when Herman Moore was selected 10th overall.

The next skill player was not taken until the 16th pick when EJ Manuel was chosen by the Buffalo Bills, making this the first time with only one QB/RB/WR taken within the first 13 selections.

Also, no running back was taken in the first round for the first time since the 1963 draft.

Last year Alabama dominated the top of the draft board, with Trent Richardson and Mark Barron going third and seventh overall, respectively.

This year the first Crimson Tide player wasn’t taken until the New York Jets selected Dee Milliner at No. 9 overall. This is the latest that the first Alabama player was been selected since 2007.

However, Tide fans didn’t have to wait long for their next player chosen. Chance Warmack (No. 10) and D.J. Fluker (No. 11) were chosen with the next two picks. This is the first time ever in the first round that teammates were taken with three straight picks.

This also marked the third straight year that Alabama has at least three first-round picks. Only Miami (2001-04) and USC (1980-83) have done before in NFL draft history.

NOTE: Unless otherwise stated, all notes refer to the Common Draft Era (since 1967) only. 1967 is the first year the NFL and AFL drafted from the same pool of players. Prior to 1967, a player could be drafted by both an NFL team and an AFL team.