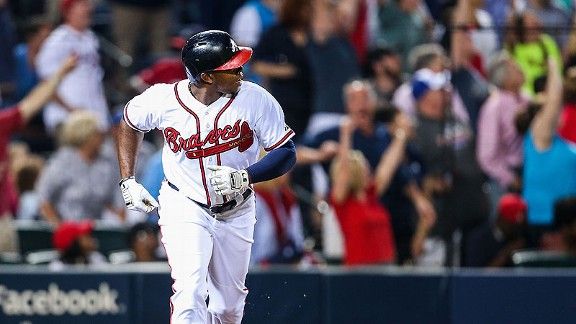 Justin Upton left little doubt to each of the 12 home runs he hit in the first month of the season.

The month of April ended in style when it came to home runs. There were 50 home runs hit on Tuesday, the most in a single day since Sept. 11, 2007 when there was also 50 home runs.

Want to know how many extra-inning home runs were hit in the month of April? With ESPN’s Home Run Tracker, you can break down every home run that was hit in the first month of the season. Click to launch the interactive HR Tracker.

No team had more than the Cleveland Indians, who hit seven against the Philadelphia Phillies, including three off Roy Halladay. The 50 home runs measured a combined 19,992 feet, or just under 3.8 miles.

Here’s a look at some of the HR highlights from the first month of the season.

Player of the Month

Justin Upton hit a league-leading 12 home runs in April, two shy of the MLB record for the most in March/April. None of Upton’s home runs were cheap -- each one traveled more than 400 feet. His longest of the month came on Opening Day against Cole Hamels. It went 460 feet, Upton’s 12th home run of at least 450 feet in the past four seasons. That’s tied with Giancarlo Stanton for the most in MLB over that span.

Upton’s average home run distance in April was 423.5 feet, that’s the highest this season among players with at least six home runs. Upton hit eight home runs in April that went at least 420 feet, four more than any other player and three more than he had all of last season. This is resurgence for Upton, who led baseball in 2011 with 18 home runs that traveled at least 420 feet.

Unlikely HR of the Month

On April 13, Nick Swisher hit a 397-foot home run at Progressive Field in Cleveland off Chris Sale. The ball cleared the 19-foot left field fence by about 10 feet. 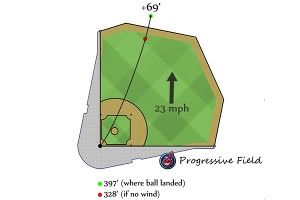 Nick Swisher's home run on April 13 was helped significantly by a strong tailwind.

The home run appeared to be a clear no doubter. However, at the time the wind was blowing 23 MPH out to left, which pushed the ball an extra 69 feet. If there was no wind, the ball would have landed about 14 feet shy of the warning track and would not have been a home run in any major-league park. It was the most wind-aided home run since David Wright’s home run was pushed 72 feet by the wind in Citi Field on April 24, 2011.

Since the start of the 2006 season, only eight other home runs have been aided more by the wind than Swisher’s.

Longest of the Month

There was a tie between the Cubs Anthony Rizzo and the Angels Mark Trumbo. On April 18 against Alexi Ogando, Rizzo hit a career-long 475-foot home run to right-center field. It was the longest home run hit at Wrigley Field since 2008.

On April 29, Trumbo matched Rizzo, hitting a career-long 475-foot shot off Dan Straily to left-center field at the O.co Coliseum. It was Trumbo’s third home run longer than 470 feet in the last three seasons, the most in baseball. There are only three other players (Giancarlo Stanton, Prince Fielder, Nelson Cruz) who have hit multiple 470-foot home runs during that time span, and 19 total such home runs. In addition, Trumbo’s home run was the longest hit at Oakland in the past eight seasons.